Jerusalem – Israelis head to the polls on September 17 for the second time in less than six months to choose a new government.

There are 31 parties in the race but opinion polls suggest the two biggest parties will be Netanyahu’s right-wing Likud party and the centrist Blue and White party led by Benny Gantz, a former army chief.

Most parties have declared their stance on Israel‘s occupation of the Palestinian territories, but some parties’ positions are less clear:

Headed by the 69-year-old Netanyahu, who is seeking a fifth term in office, the right-wing party champions tough security policies towards the Palestinians, with Likud supporters generally opposing a two-state solution to the conflict.

Ahead of the vote, Netanyahu has vowed to annex illegal Israeli settlements in the occupied West Bank if he wins next week’s general election.

“With the help of God, we will apply Jewish sovereignty to all communities, as part of the Land of Israel, and as part of the State of Israel,” Netanyahu said in an apparent attempt to win a bigger share of the vote from the 600,000 Israelis residing in settlements the occupied West Bank and East Jerusalem.

On Tuesday, he reiterated those plans during a speech broadcast live on Israeli TV, saying: “I announce my intention … to apply Israeli sovereignty to the Jordan Valley and the northern Dead Sea”.

Netanyahu is seen as a close ally of US President Donald Trump, who transferred the US Embassy from Tel Aviv to Jerusalem, recognised Jerusalem as Israel’s capital and also recognized Israeli sovereignty over the occupied Golan Heights, seized from Syria during the 1967 war.

In July, Netanyahu became Israel’s longest-serving prime minister, seizing a title that had long been held by the country’s founding father, David Ben-Gurion.

According to most pre-election opinion polls, Likud is projected to win the most seats of any party but, with no single party likely to win a majority and coalitions the norm in Israel, most right-wing and religiously conservative parties have thrown their weight behind Netanyahu’s plans to form a right-wing governing coalition.

Two of those parties are the ultra-Orthodox Shas and United Torah Judaism, which have banned women from joining their slate.

The timing of the election is not ideal for Netanyahu, as he faces a legal hearing in October in connection with three corruption cases. The attorney general informed the prime minister earlier this year that he intended to indict him on charges of bribery, fraud and breach of trust.

“Netanyahu’s political future is quite uncertain. It is possible that this election will be his final as a prime minister,” independent Israeli political analyst Mayer Cohen, told Al Jazeera.

The centrist Blue and White party is Likud’s biggest rival.

Led by Gantz, 59, in alliance with former finance minister and TV personality Yair Lapid, the party is projected to win almost as many seats as Likud, according to pre-election polls.

Although Gantz has called for pursuing peace with the Palestinians while maintaining Israeli security, he has remained largely silent on the latest US-sponsored peace plan during his campaign and avoided questions about his favoured solution to the conflict. 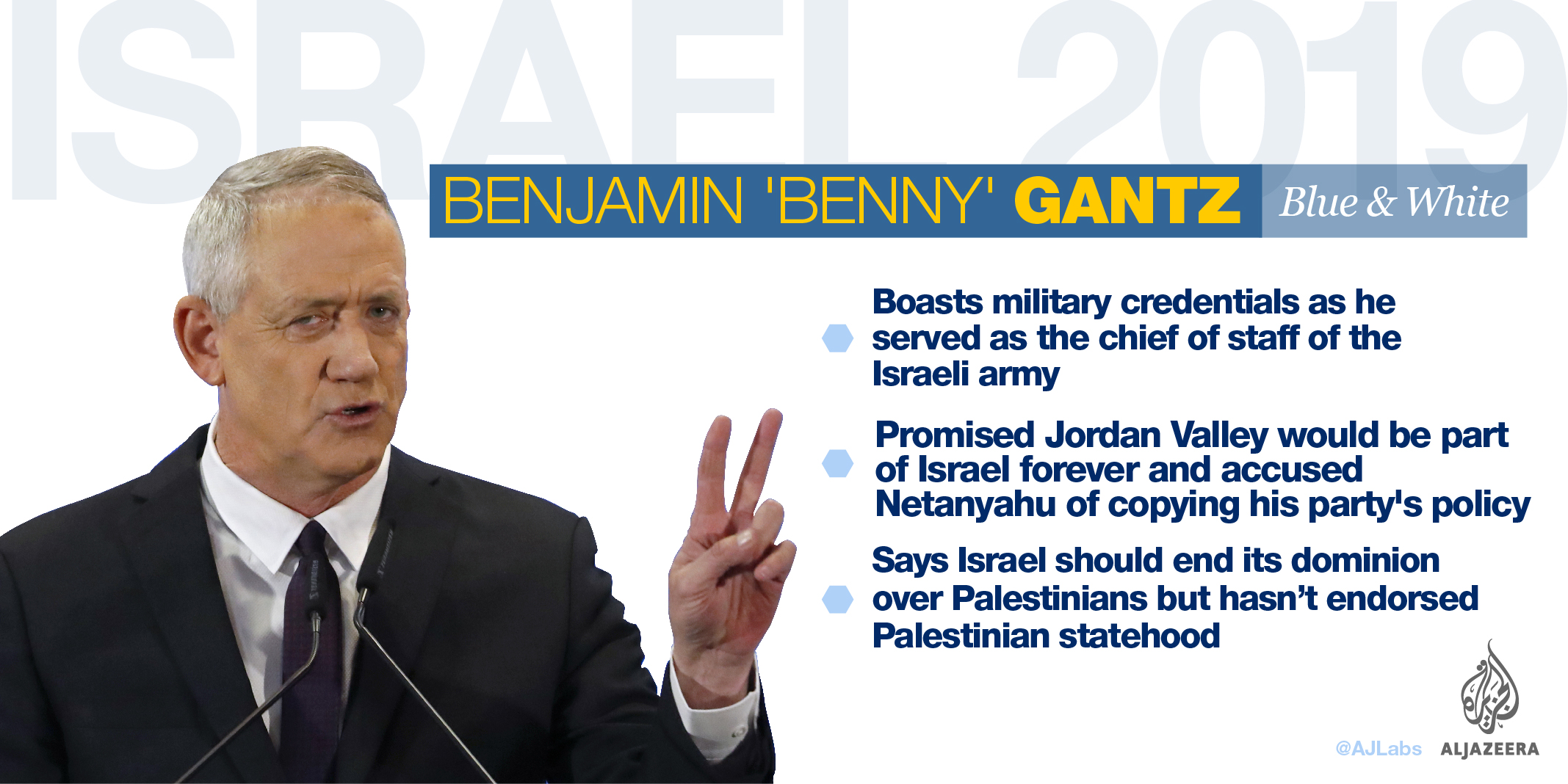 Gantz has been described as a centrist or centre-leftist but, according to analysts, his polices are right-wing.

“Gantz leans towards the right because he supports the government’s approach in dealing with Hezbollah and the situation along its northern border,” said Cohen, referring to the Lebanon-based Shia movement which Israel considers its most immediate threat.

The two foes exchanged cross-border fire earlier this month and waged a month-long war in 2006.

Diana Buttu, a Haifa-based analyst, said that because many Israelis back right-wing politics, Gantz is labelled a centrist, but “in any other country around the world, he would be labelled right-wing, if not extreme right-wing.”

“Gantz talks about bombing Gaza to oblivion,” she added, referring to the Palestinian coastal enclave which is home to two million people living under an economic and military blockade by Israel since 2007.

The Arab Joint List is an electoral alliance of four Palestinian parties headed by Aymen Odeh, leader of the Hadash party. The other parties are Taal, headed by Ahmad Tibi, the United Arab List and the Balad party.

The Arab Joint List’s support base is among Palestinian citizens of Israel who make up about 20 percent of the electorate and usually vote as a bloc. In the 2015 election, the alliance secured 13 seats, making it the third-biggest bloc in parliament at the time.

The Joint List calls for an end to the occupation and the establishment of a Palestinian state along the pre-1967 war borders, with East Jerusalem as its capital.

Although the electoral alliance split into two competing groups – Hadash-Taal and United Arab List-Balad – ahead of the April vote, it has regrouped for the September election after the two groups picked up fewer seats than expected on separate lists.

The Arab Joint List advocates rights for Palestinian citizens of Israel and Odeh has said he would work to prevent the formation of a right-wing government.

Last month, Israeli media quoted Odeh as saying that if certain conditions are met, he would be willing to join a Blue and White-led coalition. The proposal was rejected by senior Blue and White figures.

“A high percentage of Arab voters support the idea of joining a unity government [led by Gantz]. Some of the leadership believes in this, while others reject it,” said Nazir Magally, an expert in Israeli affairs.

Parties representing Palestinian citizens of Israel have never joined a governing coalition in Israel. Some supported Yitzhak Rabin’s coalition in the 1990s without formally joining it. 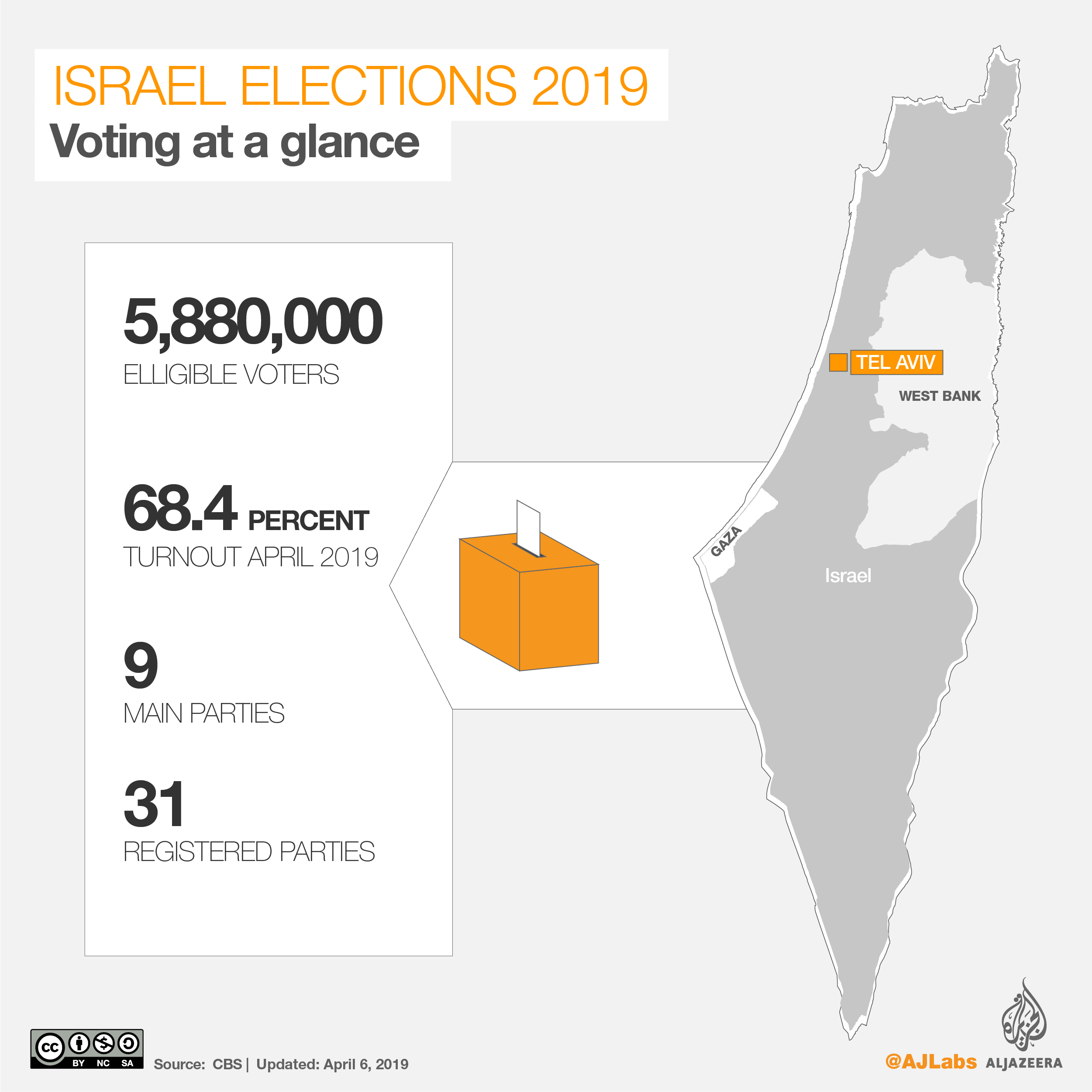 His refusal to join Netanyahu’s proposed coalition government in April led to the prime minister calling a fresh snap election.

He has proposed population swaps and the transfer of Palestinian towns in Israel to any future Palestinian state in exchange for territory where Israeli settlements have been established illegally in the occupied West Bank.

Lieberman also supports draft legislation to enforce quotas on ultra-Orthodox men to serve in the army.

The Moldovan-born party leader’s main support base is among Israeli immigrants from the former Soviet Union.

Liberman, who is likely to be kingmaker again in coalition-building after the vote, declared that he will not back Netanyahu. It remains unclear if he will support Likud or sit in opposition if the Likud party wins.

“A right-wing coalition will not be able to muster more than about 56 seats unless Liberman joins in. That’s why Lieberman will be the decision-maker,” Majdi Halabi, a Jerusalem-based political analyst and journalist, told Al Jazeera.

Meretz is popular among middle-class, liberal Israelis and advocates a two-state solution to the Palestinian-Israeli conflict and the division of the land based on the pre-1967 war borders.

It has not been part of a coalition government in the past two decades and just about cleared the electoral threshold of 3.25 percent to enter parliament in the April vote.

Barak, who served as chief of staff from 1991 to 1995 and later served as Netanyahu’s defence minister, has been critical of the prime minister during the campaign.

Once a dominant force in Israeli politics, left-wing parties have witnessed their popularity dwindle in recent decades, leaving both Meretz and the IDP vying for left-wing alliances that could help unseat Netanyahu’s right-wing government.

The parties do not have a formal position on the Israeli-Palestinian conflict, but they vowed to back Netanyahu’s right-wing coalition government if he wins the election.

The UTJ and Shas parties traditionally focus on domestic policies – such as safeguarding state benefits for Haredi men devoted to full-time religious study and the right not to join the military – above security issues and the Israeli-Palestinian conflict.