Asmaa Abdalla has barely been Sudan‘s foreign minister for 24 hours, but she already has no doubts about her top priority: removing the country from the United States‘ list of state sponsors of “terrorism”.

In an exclusive interview with Al Jazeera on Sunday, shortly after being sworn in as part of Sudan’s new cabinet, Abdalla acknowledged that while the country faced “many” challenges, its removal from the list would lead to a desperately needed economic revival in the post-Omar al-Bashir era.

“This will be undertaken through direct communication with the US administration,” Abdalla said, adding that the issue has already been raised by Abdalla Hamdok, the country’s new prime minister and a veteran economist.

The US named Sudan a “state sponsor of terror” in 1993, four years after al-Bashir seized power in a military coup, over allegations that the government was supporting terrorism. The designation makes the country ineligible for much-needed debt relief and funding from international institutions, and limits potential foreign investment.

Early last month, a senior US State Department official said there were still long-standing issues that needed to be resolved before Washington could consider removing Khartoum from its list.

“There’s a number of things we’re looking forward to engaging with a civilian-led government,” David Hale,  under-secretary for political affairs, said on August 7 when asked about the issue at a news conference in the Sudanese capital.

Abdalla is Sudan’s first-ever female minister and one of the four women named by Hamdok in the 18-member cabinet, the first since the military removed al-Bashir on April 11 in the face of mass pro-democracy protests.

The cabinet was formed as part of a transitional power-sharing agreement between the military and pro-democracy demonstrators, which also includes a joint military-civilian sovereign council and a legislative body that is supposed to be formed within three months. The three bodies are to govern Sudan for little more than three years until elections can be held.

Speaking about Sudan’s foreign policy, Abdalla highlighted the importance of maintaining a “balanced relationship” with regional and international partners.

“Our relations with our brotherly and friendly countries will be based on the basic pillar of taking into account the interests of Sudan,” she said.

“We await moral support from Arab countries and welcome unconditional financial support without interfering in Sudan’s affairs,” she said.

When asked about establishing relations with Israel, Abdalla said that currently, the time is not right to set up a diplomatic channel because Sudan “does not need new problems”.

“Most Arab countries have relations with Israel in one way or another, but for the moment we cannot afford to normalise relations [between Khartoum and Tel Aviv],” she said. 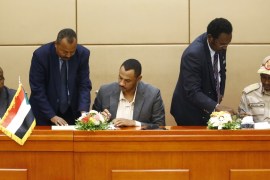 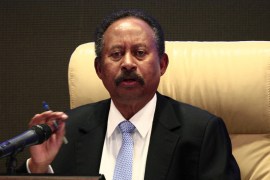