Hong Kong leader Carrie Lam said on Thursday she hoped her decision to withdraw a controversial extradition bill that triggered three months of sometimes violent mass protests would bring an end to the political crisis in the Chinese self-governing territory.

Speaking to the media for the first time after announcing the move in a pre-recorded televised message on Wednesday night, Lam said the bill would be a formally withdrawn at the next session of the city’s Legislative Council, which is scheduled for next month.

“The bill will be withdrawn,” she said.”There will be no debate and no vote.”

She skirted questions on why it had taken her so long to withdraw the bill in the face of the escalating violence, and stressed that her government had China’s full support.

China-backed Lam acknowledged the deep divisions among Hong Kong’s people and said her government was committed to finding ways to address the discontent.

“After more than months of social unrest it is obvious to many of us that the discontentment in society extends far beyond the (extradition) bill,” she told reporters.

“It covers political, economic and social issues including the oft-mentioned housing and land supply, income distribution, social justice and mobility, and opportuniites for our young people, as well as how the public can be fully involved in the government’s decision-making.

Although the bill sparked the protests, its withdrawal is now one of only five demands being made by the pro-democracy protesters who have targetted government buildings, the central business district and the airport in some 13 weeks of demonstrations.

They have promised to continue the rallies until the administration meets all their demands including for universal suffrage and an independent investigation into the police response to the protests. More than 1,100 people have been arrested as a result of the unrest.

“They will go ahead with the protests because they want their five key demands met,” Al Jazeera’s Sarah Clarke said after speaking to key figures in the demonstrations.

“In particular, what they describe as “police brutality”. There have been accusations that the police have been hostile with regards to arrests and their behaviour towards these protesters, and there is anger about what they believe is the escälation of violence from the police side.

The mainland’s official China Daily said on Thursday that the withdrawal of the bill was an olive branch that leaves demonstrators with no excuse to continue violence.

Skirmishes broke out in some districts late on Wednesday after Lam’s announcement, which followed a weekend of some of the most violent protests the city has seen over the past three months.

Police said a suspected petrol bomb was hurled at a luxury property in Kowloon district in the early hours of Thursday and the suspects fled on a motorbike. Local newspaper Apple Daily said the house belonged to Jimmy Lai, who was in the property at the time. The publishing tycoon Lai is an outspoken critic of Beijing.

The extradition bill would have allowed people in Hong Kong to be sent to China for trial in courts controlled by the Communist Party, was seen as the latest example of what many residents see as ever-tighter control by the mainland, despite the promise of autonomy.

The former British colony was handed back to China in 1997 under a “one country, two systems” framework that gave the city of more than seven million people more freedoms than those on the mainland, including an independent judiciary.

Lam is due to visit China’s Guangxi province on Thursday afternoon.

The Hong Kong government took out a full-page advertisement in the Australian Financial Review on Thursday saying it is “determined to achieve a peaceful, rational and reasonable resolution” and is resolutely committed to “One Country, Two Systems”.

It ends the advertisement by saying: “We will no doubt bounce back. We always do”. 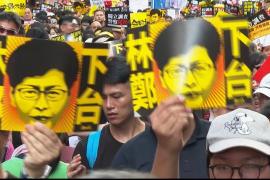 Rally organisers say the legislation’s withdrawal will be celebrated briefly but it’s not enough to end China’s encroachment of its autonomy.