Turkish President Recep Tayyip Erdogan suggested his country may buy Russian-made Su-35 and Su-57 fighter jets instead of US-made F-35 fighters as the dispute between the NATO allies shows no sign of abating.

Erdogan said Turkey was weighing the Russian aircraft purchase amid an ongoing spat with Washington after Ankara bought the S-400 missile defence system from Moscow, CNN Turk reported on Thursday.

The US started removing Turkey from its F-35 programme – as it long threatened – last month after Ankara started receiving the S-400.

“Su-35 and Su-57 planes among the alternatives … why not? We did not come here in vain,” Erdogan was quoted as saying following a meeting with Putin in Moscow earlier this week.

He added the decision would be made after he hears Washington’s final decision on Turkey’s participation in the F-35 programme during a phone conversation with US President Donald Trump expected to take place in the next few days.

Meanwhile, US military chief Mark Esper voiced hope that Turkey would abandon the S-400 system, saying Ankara could still return to the F-35 programme if it does so.

“It’s either the F-35 or the S-400. It’s not both. It’s not park one in the garage and roll the other one out. It’s one or the other,” Esper told reporters at the Pentagon on Wednesday.

“We are where we are and it’s regrettable… Turkey’s been a long-standing partner and ally and I would hope they would move back in our direction and really live up to what NATO agreed to many years ago. And that was to begin divesting of Soviet-era Russian equipment [but] they seem to be moving in a different direction.”

Washington had tried for months to prevent Turkey’s acquisition of the S-400 – which can hit targets as far as 400km away – arguing they are incompatible with NATO systems.

It also said that if the S-400s were to be deployed near the Lockheed Martin F-35 jets, which Turkey was helping to produce, they would undermine the stealth fighters’ defences.

Ties between Ankara and Washington have been strained over a host of issues, including conflicting strategies in Syria, but the dispute over the Russian systems has brought the NATO allies to the brink of one of their biggest ruptures in ties.

But in contrast to statements by US officials, Trump has repeatedly said Turkey was treated unfairly over its decision to buy the S-400s and blamed the “mess” on the administration of former President Barack Obama.

Trump has not ruled out imposing sanctions on Ankara over the issue, however. 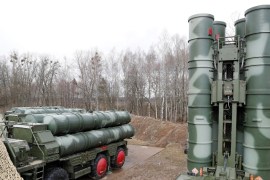 Ankara has gone ahead with its purchase of the Russian defence system despite threats of US sanctions. 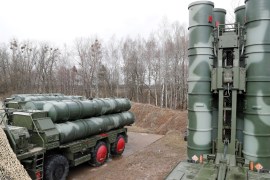 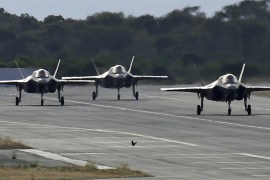