An Italian prosecutor has ordered the immediate disembarkation of scores of people on board a refugee rescue ship that has been stuck for days off the Italian island of Lampedusa.

The decision came amid warnings that the condition of the more than 80 stranded people had reached the breaking point, as the Open Arms vessel was refused permission to dock by Italy’s far-right Interior Minister Matteo Salvini as part of his anti-immigration policies.

The order was given on Tuesday by the Agrigento prosecutor’s office after an inspection on board by its chief prosecutor, Luigi Patronaggio, Italy’s ANSA news agency reported.

“Finally, the nightmare is over and the 83 people on board will receive immediate assistance on land,” the Open Arms charity, whose vessel has been off Lampedusa since August 15, wrote on Twitter after the prosecutor’s order.

Earlier in the day, 15 people jumped into the sea in a “desperate” effort to reach the shore, Open Arms said in series of tweets. They were picked up by the Italian coastguard and taken to the island.

“They are seeing the coast at 200 metres, and they see they cannot reach the coast so they feel like they are in jail,” Open Arms spokeswoman Laura Lanuza had told Al Jazeera.

She added that the people on board had all escaped situations of great “abuse” and “all kinds of extortion”, leading many “in a terrible psychological state”.

The prosecutor’s order came hours after Spain’s government said it was sending a navy ship to assist the Open Arms in reaching a Spanish port some 1,000km away.

Salvini, who refused to allow the asylum seekers to disembark in Italy despite offers from six European countries to take them, previously said on Facebook he was expecting the move.

“The Agrigento prosecutor’s office is about to order the impounding of the ship and the disembarkation of the people [on board],” he said, adding that he expected to face accusations of abuse of office for failing to guarantee adequate health and safety conditions on the rescue vessel.

Hitting back, he added: “If anybody thinks they can scare me with the umpteenth complaint and wants a trial, they’re mistaken.” 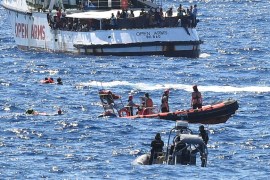 Spanish warship to assist transfer of refugees stranded off Italy 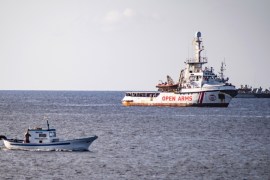 Charity says refugees stranded off Italy should be flown to Spain