A Kyrgyz officer was killed Wednesday when special forces stormed the compound of former president Almazbek Atambayev, as mounting tensions with his successor Sooronbai Jeenbekov threaten to spark a political crisis in the fragile Central Asian state.

The officer died from a gunshot wound after Atambayev’s supporters tried to stop his arrest, the Kyrgyz health ministry said.

“A special forces officer was delivered (to hospital) in an extremely serious condition with a gunshot wound. Despite resuscitation attempts, he died,” it said in a statement.

Atambayev, who ruled Kyrgyzstan from 2011 to 2017 before handing over to Jeenbekov, has barricaded himself in his residence. He also increased security at his estate in the village of Koi-Tash outside the capital Bishkek, as tensions between him and Jeenbekov rise.

Clashes broke out at Koi-Tash in the evening after Kyrgyzstan’s national security committee (GKNB) said its special forces were undertaking a “special operation to detain former president Almazbek Atambayev”.

The GKNB claimed that special forces were armed “only with rubber bullets” while Atambayev’s supporters had shot back with firearms.

The health ministry said that 36 people, including 15 members of the security services, had been admitted to hospital with injuries.

Atambayev saw his immunity lifted in June as the authorities seek to prosecute him on corruption charges.

He has ignored three police summons for questioning in a case connected to the surprise release from jail of a well-known underworld boss during his presidency.

Atambayev has still not been detained, several key aides have confirmed.

Mirbek Aitikeyev, an eyewitness at Koi-Tash who broadcast footage from the compound live on Facebook, told AFP news agency that some of the former president’s loyalists had seized weapons from the special forces.

Local and foreign media struggled to reach staff working at Koi-Tash as authorities appeared to block internet and mobile connections in the village, which is a short drive from Bishkek.

Dmitriy Lozhnikov, a member of the political council in Atambayev’s Social Democratic Party of Kyrgyzstan, also told Russia’s state-owned news channel, Russia-24, that electricity to the village had been cut.

Following the lifting of his immunity by parliament, which Atambayev says was unconstitutional, the former president vowed to “stand to the end” against the charges, calling Jeenbekov’s administration a “mafia clan.”

The two men were once friends and Atambayev backed Jeenbekov’s candidacy in the 2017 elections. But they fell out just months after Jeenbekov’s inauguration as Atambayev publicly criticised his successor.

Atambayev became Kyrgyzstan’s first elected president to hand over power peacefully in 2017, following revolutions in 2005 and 2010.

Jeenbekov has accused Atambayev of seeking to control politics from the comfort of retirement.

The conflict between the two men, both of whom have been accused of using law enforcement agencies to get rid of political opponents, could turn into a full-blown political crisis.

Last month, Atambayev travelled to Russia and met Vladimir Putin, who pledged his support to Kyrgyzstan but advised “everyone to unite around the current president and help him develop the country.”

The conflict in Kyrgyzstan is likely to be watched with apprehension both in Russia and China, whose political and economic interests in the country deepened during Atambayev’s rule. 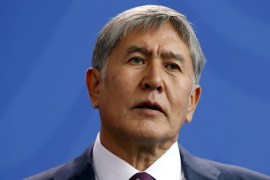 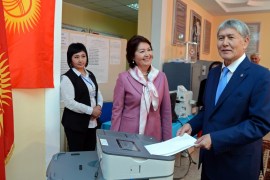 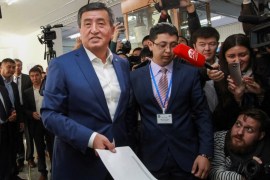