Puerto Rico‘s Justice Secretary Wanda Vazquez was sworn in as governor on Wednesday hours after the Supreme Court ruled that Pedro Pierluisi is not the legitimate governor of the US territory, despite being sworn in on Friday.

Vazquez said that she was assuming office “with the greatest respect and determination to serve my people and to push Puerto Rico forward” in a communique released after her swearing-in.

Vazquez’s inauguration was the latest twist in the political saga rocking the self-governing United States territory, and came after its top court ruled that last week’s swearing-in of Pedro Pierluisi was unconstitutional.

The justices unanimously found that since the territory’s Senate never confirmed Pierluisi, “the assumption of the office of governor was unconstitutional”.

The political contretemps followed massive street protests that forced the resignation of Governor Ricardo Rossello, who left office on Friday after coming under fire over corruption scandals and leaked electronic chats with associates.

Shortly before leaving office, Rossello effectively made Pierluisi his successor by appointing him secretary of state, the next to the governor in the line of succession.

Vazquez, next in line after Pierluisi, was confirmed shortly after the court ruling, in compliance with the law.

Al Jazeera’s Gabriel Elizondo, reporting from the capital San Juan, said that Vazquez is being viewed by Puerto Ricans with deep scepticism because she is seen as an ally of Rossello.

“The people here are still trying to digest the information. They are trying to see what’s next here. It is interesting because Wanda Vazquez, the new governor, just a few days ago said she didn’t even want the job.”

Pierluisi stepped down calling for unity and for Puerto Ricans to discard their “political-partisan, ideological or personal agendas”.

“When I assumed the position of governor last Friday, I did it based on the express language of Puerto Rico’s Constitution and the law in force at that time,” Pierluisi said in a statement, adding that he acted under laws that “are presumed constitutional, and therefore valid.”

Rossello, Pierluisi and Vazquez are all members of Puerto Rico’s New Progressive Party (PNP), which favours annexation of Puerto Rico as the 51st US state.

Jenniffer Gonzalez, the congresswoman representing Puerto Rico in Washington, said that the Senate “did the right thing by taking out the political and partisan debate so that the Supreme Court can make the decision in accordance with the Constitution”.

Puerto Rico has been shaken by weeks of street protests set off by the leak of 889 pages of hacked text messages in which Rossello and his inner circle made fun of women, gays, hurricane victims, journalists and politicians.

The leak touched a deep well of public discontent that has brewed since the devastating 2017 Hurricane Maria, which left 3,000 dead and Puerto Rico in shambles.

A debt crisis, government corruption scandals and a painfully slow recovery from Maria have added to the island’s political woes. 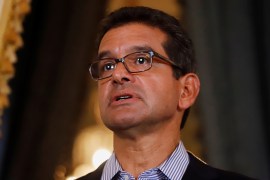 After days of uncertainty, Supreme Court rules Pedro Pierluisi is not the legitimate governor of the island. 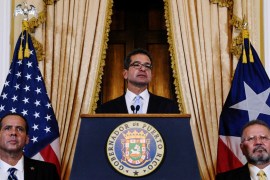 Pedro Pierluisi is next in line to be governor but the Senate must approve his appointment. 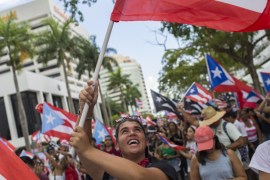 Hours before Ricardo Rossello is expected to leave office, Puerto Ricans still have no idea who will replace him.