At least 19 people were killed and 30 others injured in an explosion outside Egypt’s National Cancer Institute in central Cairo, Egypt’s health ministry said early on Monday.

The interior ministry said one car was speeding and collided with the others, causing the explosion late on Sunday.

But why the crash caused such a large explosion was not immediately clear. It also was not clear if the casualties were all from the vehicles.

The cancer treatment facility was evacuated after the crash, which happened near the famed Tahrir Square.

The bank is at the opposite side of the hospital.

The health ministry said the injured people were taken to hospitals for treatment.

Egypt’s public prosecutor is investigating the cause of the incident, sources told Reuters news agency. There was no official statement indicating that the explosion was an attack.

Sources told Al Jazeera that a team of prosecutors, criminal laboratory and bomb experts has arrived at the scene of the explosion. 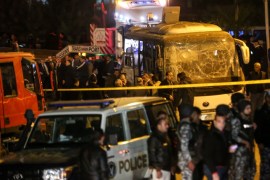 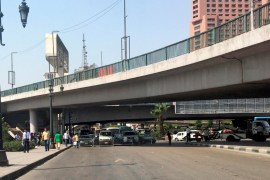 Egypt: Suspected bomb found near US embassy in Cairo

One man, reportedly in his 20s, arrested after incident just metres away from the building in central Cairo.