North Korea has released a Russian fishing boat and its crew held after being accused of violating entry regulations, the Russian embassy in Pyongyang has said, in an incident that prompted a Russian warning of a freeze of talks on fisheries cooperation.

The 15 Russian and two South Korean crew members of the Xiang Hai Lin 8 were detained on July 17, according to the embassy.

In a Facebook post on Sunday, the embassy said the “coordinated work of the Russian diplomatic agency” led to the release.

It also said the ship’s captain was informed of the crew’s planned release about three hours before their departure from North Korea’s Wonsan port.

An unidentified crew member told Russia’s state news agency Tass that the ship was released without being fined.

“The full crew is aboard the ship, everyone is feeling well,” he was quoted as saying.

The Tass report said the ship was heading to the waters between the Korean Peninsula and Japan to catch crabs when it was detained.

Russia earlier said the boat had not broken any laws. Its RIA news agency reported that Moscow would not hold any talks with North Korea on fisheries cooperation – which covers fishing quotas for North Korean fisherman in Russia’s far east – until the matter was satisfactorily resolved.

South Korea‘s Unification Ministry, which handles relations with North Korea, also confirmed the release of the boat and the two South Koreans.

The ministry said in a statement the crew arrived aboard the same boat at South Korea’s eastern Sokcho port on Sunday, a day after they left Wonsan.

Seoul officials did not immediately explain how they were detained, treated and repatriated, saying North Korea had not informed South Korea of its decision to release the crew.

Ties between the Koreas remain cool amid a lack of progress in US-led diplomacy aimed at ending North Korea’s nuclear program.

Fishing boats drift across the Koreas’ eastern sea border in both directions.

South Korea’s Joint Chiefs of Staff said the North Koreans were under investigation.

South Korea typically returns North Korean fishermen unless they are suspected of espionage. But it also lets them resettle in the South if they want, often triggering an angry response from the North. 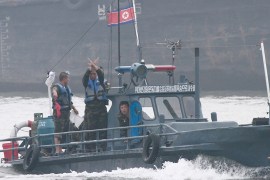