Bogota, Colombia – Thousands have marched in cities across Colombia to protest against the alarming rate of killings of activists and human rights defenders since the country’s 2016 peace deal.

The “march for life” protests took place on Friday in more than 80 cities in Colombia.

In the capital, Bogota, some took to the streets with photos of slain activists, while others carried an enormous banner bearing the names of the hundreds who were killed because of their efforts to implement initiatives in the 2016 peace deal between the Colombian government and Marxist FARC rebels.

A key issue in the agreement, which ended five decades of armed conflict, was crop substitution. Many of those murdered were helping farmers move from illegal to legal farming, including ending the planting of coca, the base ingredient in cocaine, which provides an important source of income for criminal gangs and rebel fighters.

Protesters in Bogota blew horns and pleaded with President Ivan Duque’s government and the international community to take action over the killings.

“I’m here to protest against the killing of leaders and to tell the government that we don’t want to go back to war… we don’t want a president who wants war,” said Maria Serpa, who runs a foundation for victims of Colombia’s armed conflict.

The 45-year-old was carrying a sign that read: “We are the cries of those who are no longer with us.”

The exact number of the killings are disputed. The government says 289 social leaders have been murdered since 2016, but the think-tank Indepaz puts the number at 702. The office of Colombia’s ombudsman estimates 479 have been killed.

Duque’s government claims the murder rate of social leaders has decreased by 35 percent in the past year, but Human Rights Watch said the figure was misleading as scores of killings in that period are still being verified.

Duque, who assumed office in August last year, told a delegation of the UN Security Council earlier this month that he is working to halt the killings. He said criminal groups and remnants of rebel groups “want to intimidate and kill social leaders who are calling on their communities to abandon illegal activities”.

But protesters said the president has yet to take drastic measures on the issue.

“The government needs to break their silence on these crimes,” said Nicolas Vargas, a 24-year-old psychology student.

Some held photos of social leader Maria del Pilar Hurtado, who was shot dead in front of her nine-year-old son for speaking out against paramilitary groups in her native Cauca region last month. A video of her son screaming over her dead body was widely shared in Colombia.

“I’m here mainly to show Colombia and the world what’s happening, to help to show the killing of social leaders,” said Laura Conejo, a 24-year-old teacher holding a sign saying “being a social leader isn’t a crime.” 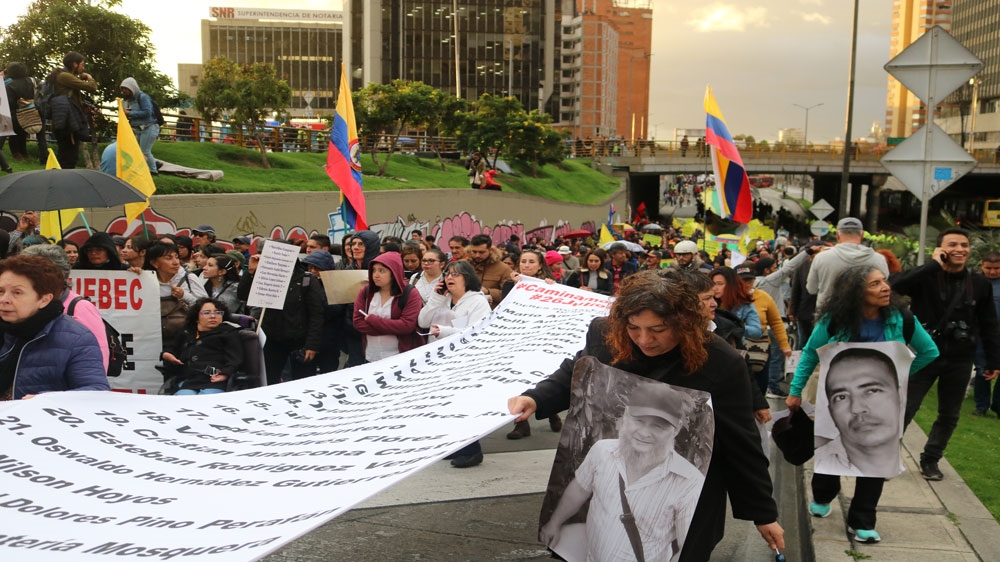 There were solidarity marches in other world capitals, including Washington, London and Paris.

“We are marching in solidarity with Colombians because we are tired of putting out urgent actions pressuring Colombia to implement peace and protect its social leaders,” said Gimena Sanchez, a leading Colombia human rights advocate at WOLA, a Washington, DC-based research and advocacy organisation.

“Nearly 500 social leaders have been assassinated and there is no accountability nor real effort to stop the violence from repeating itself,” she added.

Fernanda Doz Costa, deputy director for Amnesty International in the Americas, said the Colombian government “has all the tools, the obligation and responsibility to protect social leaders and human rights defenders”.

She added: “They need to be present in the territories most affected by the armed conflict which have been systematically abandoned by the government for years.” 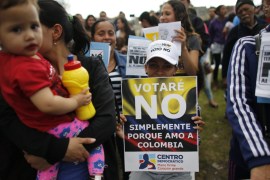 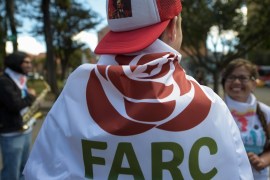 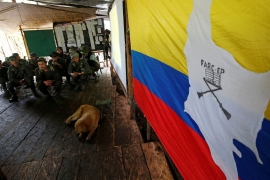 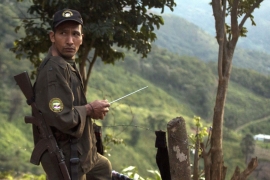