Boris Johnson has been elected leader of the United Kingdom‘s Conservative Party and, by default, the country’s next prime minister.

The Brexit hardliner, a former London mayor, on Tuesday won the votes of 92,153 members of the ruling party, while his rival, Foreign Minister Jeremy Hunt, won 46,656.

Johnson is set to become prime minister on Wednesday, after Theresa May formally steps down.

In his victory speech, the 55-year-old said his campaign message had been to “deliver Brexit, unite the country and defeat [opposition Labour leader] Jeremy Corbyn – and that is what we are going to do”.

“Do you look daunted? Do you feel daunted? I don’t think you look remotely daunted to me,” Johnson told party members at the Queen Elizabeth ll conference centre in London. “We are going to get Brexit done.”

Joey Jones, a former May spokesman, told Al Jazeera that Johnson remained a divisive figure in large parts of the United Kingdom.

“I wondered if we might see a different Boris Johnson in this particular speech. A bit more sober, with the mantle of power and prime ministerial authority descending on to him,” he said.

“And I think he was actually very true to himself. It was quite serious and yet still with the big rhetorical flourishes. He wants to be true to Boris.”

Johnson has vowed to negotiate a new Brexit divorce deal with the European Union before the scheduled October 31 deadline, but Brussels has insisted it will not reopen negotiations.

He has said he would ramp up preparations for a no deal to try to force the EU’s negotiators to make changes to the accord.

“We will of course be pushing our plan into action, and getting ready to come out on October 31, come what may … do or die, come what may,” Johnson told Talkradio last month.

The only deal on the table has been rejected three times by the British parliament and many legislators – including pro-EU rebels in the Conservative Party – are also vowing to block Johnson from trying to take Britain out of the EU without a deal.

EU leaders said they want to work with Johnson to ratify the Brexit withdrawal deal signed by his predecessor.

“We look forward to working constructively with PM Boris Johnson when he takes office, to facilitate the ratification of the Withdrawal Agreement and achieve an orderly Brexit,” EU negotiator Michel Barnier said on Twitter after Johnson’s victory was confirmed.

Reporting from London, Al Jazeera’s Jonah Hull said the new leader faces difficult parliamentary arithmetic as well as divisions within his own party.

“Boris Johnson inherits a parliament that is as divided as it ever was under Theresa May, who failed to deliver Brexit. He inherits a majority that is frailer than Theresa May’s, just three seats in it, one of which they will almost certainly lose next week in a by-election,” he said.

“Others could go by the wayside, with rumours of MPs willing to defect to other parties. By the autumn it is conceivable that Johnson no longer has a majority and that would be the moment for Corbyn to call a confidence vote.”

A number of Conservative Party ministers have already announced they will resign to fight against a no deal Brexit, which experts warn would push the UK’s economy into a severe downturn. 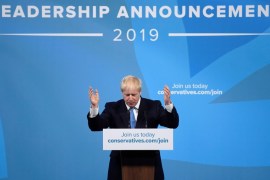 What to expect from Prime Minister Boris Johnson?

Johnson, much like Trump, is a politician who knows no red lines. 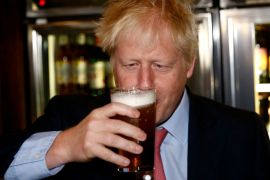 Johnson cultivated a reputation as a charming upper-class womaniser, cheat and liar – and some Britons love him for it. 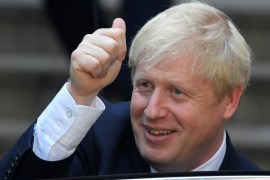 Will Boris Johnson be up to his new job?

Boris Johnson will be the UK’s new prime minister after winning the Conservative Party leadership. 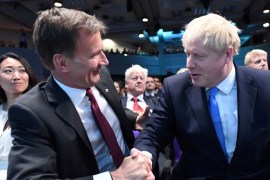 US President Donald Trump says Johnson ‘will be great’, as EU negotiator Barnier says ready to work for orderly Brexit.