Iran’s Revolutionary Guard Corps (IRGC) has released footage showing a British oil tanker being seized in the Strait of Hormuz.

The Stena Impero tanker “was confiscated by the Revolutionary Guards at the request of Hormozgan Ports and Maritime Organisation when passing through the Strait of Hormuz, for failing to respect international maritime rules,” the IRGC said on Friday.

A video posted online on Saturday showed Iranian soldiers in black ski masks rappelling from a helicopter onto the vessel.

It also showed several small IRGC boats surrounding the larger tanker as it moved through the strait. A military helicopter hovered above and several men wearing black masks began to rappel onto the ship.

The video was shot with at least two cameras, one from a speed boat-like vessel and one from the helicopter, which captured the men as they prepared to slide down a rope and also took aerial footage of the tanker.

IRGC releases a video of the moment that their forces seized #British #tanker #StenaImpero in #StraitOfHormuz. #Iran #IRGC #UnitedKingdom pic.twitter.com/29Q11mgzFP

The episode prompted condemnation from the United Kingdom and its European allies as they continued to call for a de-escalation of tensions in the critical waterway.

In comments on Twitter on Saturday, Hunt said he spoke with his Iranian counterpart but was disappointed by Iran saying it wanted to de-escalate the situation but “have behaved in the opposite way”.

“This has [to] be about actions not words if we are to find a way through. British shipping must & will be protected,” said Hunt.

Just spoke 2 Iranian FM Zarif &expressed extreme disappointment that having assured me last Sat Iran wanted 2 deescalate situation they have behaved in the opposite way.This has 2 be about actions not words if we are to find a way through.British shipping must & will be protected

The free flow of traffic through the Strait of Hormuz is of international importance because one-fifth of all global crude exports pass through the waterway from Middle East exporters to countries around the world.

The narrow waterway sits between Iran and Oman.

The owner of Stena Impero, Stena Bulk, said the vessel was stopped by “unidentified small crafts and a helicopter” during its transit through the Strait of Hormuz.

It was seized with a crew of 23 crew on board, although none are British nationals.

Hunt said the ship’s seizure showed worrying signs that Iran may be choosing a dangerous and destabilising path. He also defended the British-assisted seizure of Iran’s supertanker two weeks ago as a “legal” move because the vessel was suspected of breaching European Union sanctions on oil shipments to Syria.

But Iran’s Foreign Minister Mohammad Javad Zarif characterised the seizure of Iran’s tanker on July 4 as “piracy” in comments he made on Twitter, adding that the objective behind Iran’s actions on Friday was to uphold international maritime rules.

Unlike the piracy in the Strait of Gibraltar, our action in the Persian Gulf is to uphold int'l maritime rules.

As I said in NY, it is IRAN that guarantees the security of the Persian Gulf & the Strait of Hormuz.

UK must cease being an accessory to #EconomicTerrorism of the US.

Al Jazeera’s Dorsa Jabbari, reporting from Tehran, said the IRGC spokesperson added there was a British warship that was accompanying the oil tanker.

“The warship did try to intervene and prevent the Guards from seizing this vessel,” Jabbari said.

“The ship will go through the due legal procedures before it is going to be released … Iran was carrying out its due diligence in the waters of the Strait of Hormuz,” she added, citing Iranian officials.

The move by Iran has drawn condemnation from European signatories to Iran’s nuclear accord with world powers.

Germany and France both called on Iran to immediately release the ship and its crew, with Berlin saying the seizure undermines all efforts to find a way out of the current crisis.

Europe has struggled to contain the tensions that stem from US President Donald Trump‘s decision to pull the US from Iran’s nuclear deal, which had lifted sanctions on Iran in exchange for compliance on its nuclear programme.

Trump has since reimposed sweeping sanctions on Iran, including its oil exports, and Iran recently increased uranium enrichment levels beyond limits of the deal in a bid to pressure Europe into finding a workaround the crippling economic sanctions. 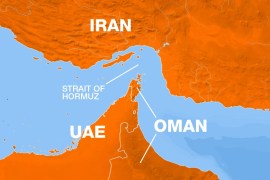 US official says new initiative will seek to ensure ‘free, open passage’ for ships passing through the Strait of Hormuz. 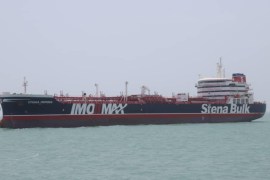 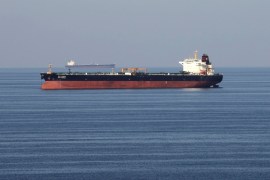 Will tension in the Gulf spiral out of control?

Iran seizes a UK oil tanker after Britain detained one of its ships off the coast of Gibraltar earlier this month.