Greeks have voted to elect a new parliament in a snap election, with exit polls indicating a clear victory for centre-right New Democracy party headed by Kyriakos Mitsotakis.

After a largely lacklustre campaign dominated by disappointment over the pace of the country’s economic recovery, the 12-hour polling closed on Sunday across Greece at 7pm (1600 GMT).

Prime Minister Alexis Tsipras, 44, had called the election three months before the end of his term after his left-wing Syriza suffered a crushing 9.5-percentage point defeat in May’s European Parliament elections.

“One of the first exit polls we have heard puts the New Democracy at between 38 and 42 percent of the popular vote while Syriza is at 26 and 30 percent,” he said.

If these results are confirmed, Mitsotakis, a 51-year-old Harvard graduate and scion of one of Greece’s top political families, will have a majority of up to 167 legislators while Tsipras’s party may win up to 82 seats, the polls said.

The result will mark a major shift for the crisis-hit country run for nearly a decade by fragile coalitions of ideologically divergent parties united by their stance either in favour or against Greece’s bailout deals.

Public surveys in the lead-up to Sunday’s vote showed New Democracy retaining a firm 8-10 percentage-point lead over Syriza, as well as being able to secure an outright majority.

The projections, coupled with the fact that the election is being held for the first time in the middle of summer, a time when many Greeks are either on holiday or holding temporary tourism jobs far from their homes, shifted attention on turnout.

Both Tsipras and Mitsotakis had called on their supporters not to assume Sunday’s result is a foregone conclusion and to go out and vote.

Tsipras used the final days of the election campaign on a tour through some of Greece’s biggest cities, insisting he could pull off a comeback.

“The upset will come if everyone and each one of us succeeds in persuading another one to come to the ballot box,” he told supporters in Heraklion, the largest city on the island of Crete, earlier this week.

For his part, Mitsotakis repeated his call for voters to give him a “strong mandate” that will allow his party to implement its manifesto, which is largely focused on introducing tax cuts, attracting much-needed investments and bolstering security.

“Now is the time for responsibility, rallying together and participation,” he said at a campaign rally in Athens on Thursday.

The election on Sunday came as Greece struggles to emerge from a nearly decade-long financial crisis that saw its economy shrink by a whopping 25 percent and hundreds of thousands of mostly young people leave the country in the hopes of better opportunities abroad.

Syriza, which before the crisis was on the fringes of the country’s political landscape, stormed to power in January 2015, replacing a New Democracy-led government amid widespread discontent over years of harsh fiscal measures imposed by Greece’s bailout creditors.

But despite its promises to end austerity, the Syriza-led government seven months later caved in to the European Union and the International Monetary Fund‘s demands, signing onto a third bailout deal and implementing further tax hikes. Still, it managed to regain power in a snap election in September 2015 and form a coalition government with the nationalist Independent Greeks party.

Greece exited its final bailout last year but is still under financial surveillance from its creditors. Its economy is expected to expand by around two percent in 2019 but financial woes remain, including an unemployment rate of 18 percent, the eurozone’s highest.

Along with the chronic financial grievances, mainly from Greece’s shrinking middle class, Tsipras’s government has also come under fire for mismanaging crises, including the response to a devastating fire near Athens last summer that killed 102 people, and for brokering a widely unpopular deal to resolve a decades-long dispute over the name of neighbouring North Macedonia.

Panos Polyzoidis, a political analyst in Athens, told Al Jazeera that a New Democracy win could signify “a return to normality … [and] possibly the end of the crisis, in political terms.

“That crisis has cost most political forces a lot in influence. New Democracy is one of the parties that survived. It also seems that Syriza is a party that came to the limelight because of the crisis and will probably also survive the post-crisis period.”

Looking ahead, Polyzoidis said “the jury is not out yet” on the financial front.

“It’s very difficult to see where this is heading,” he said. “The bailout programmes have ended, but austerity has not ended,” Polyzoidis added. “New Democracy has been promising growth-orientated policies, lowering taxes, lowering social security contributions. It all remains to be seen how feasible these are because the fiscal restrains remain.”

According to official figures, 9,959,012 people, including nearly 520,000 first-time voters, were registered to cast ballots. Greeks living abroad were not allowed to vote. 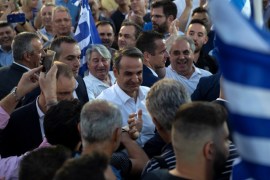 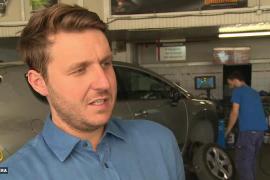