President Donald Trump has asked Russia’s Vladimir Putin not to meddle in US elections after allegations that Moscow interfered in the 2016 campaign.

The leaders traded brief remarks on Friday before a meeting on the sidelines of the G20 summit in Osaka, Japan, when a reporter shouted to Trump about warning Putin “not to meddle” in the 2020 election.

Trump replied: “Yes, of course, I will”, drawing a laugh from Putin.

The American president then turned to Russia’s leader to give the directive twice as he pointed a finger at him. “Don’t meddle in the election, please,” Trump said.

It was the first time the two leaders have had a formal face-to-face meeting since a controversial high-profile summit in Helsinki last July. Trump’s critics have accused him of being too friendly with Putin and castigated him for failing to publicly confront the Russian leader over the election-meddling allegations.

A redacted version of US special counsel Robert Mueller’s report published in April did not establish a criminal conspiracy between Trump associates and the Kremlin to sway the outcome of the election.

Trump also said on Friday he enjoyed a “very, very good relationship” with Putin, and said “many positive things are going to come out of the relationship”.

He said trade and disarmament were among the issues they would discuss.

The meeting with Putin, which came amid a gauntlet of negotiations on international crises, trade wars and a growing global to-do list, was the main event on Trump’s agenda on Friday at the G20 summit in Osaka.

In a further attempt to lighten the mood, Trump sought common ground with Putin at the expense of the journalists who gathered to catch the leaders at the outset of their meeting.

“Get rid of them. Fake news is a great term, isn’t it? You don’t have this problem in Russia but we do,” Trump said.

To which Putin responded in English: “We also have. It’s the same.”

Trump said in advance of meeting Putin he expected a “very good conversation” with the Russian leader, but told reporters “what I say to him is none of your business”.

Relations between the two countries have been sour for years, worsening after Russia annexed Crimea from Ukraine in 2014 and backed Syrian President Bashar al-Assad in the Syrian war.

The US and Russia are also on opposing sides of the escalating crisis with Iran, after a US drone was shot down by Iranian forces last week.

The incident marked the first direct Iranian-claimed attack on US assets and came amid heightened tensions, unleashed by Trump’s decision last year to withdraw from an international accord that curbed Tehran’s nuclear programme.

It was also the latest in an escalating series of incidents in the Gulf since mid-May, including suspected attacks on six tankers, and has prompted international alarm that the standoff could escalate into an open confrontation.

Trump stressed on Friday “there’s no rush or time pressure” to ease the tension with Iran. 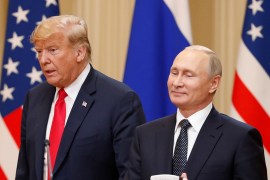 US President Donald Trump tweets he ‘had a long and very good’ phone call with Russian President Vladimir Putin. 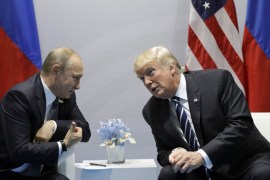 US president reportedly asked a translator not to disclose or discuss details of his conversation with Vladimir Putin. 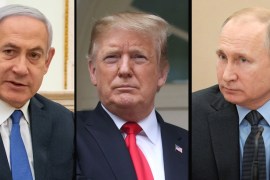 The Israeli prime minister has worked hard to grow his political bromance with the presidents of Russia and the US.