Thousands of Algerians have rallied in the country’s capital, Algiers, keeping up their call for a political overhaul as authorities detained a high-profile businessman and the head of the state bank on charges of corruption.

Demonstrators returned to central Algiers on Friday for their latest weekly rally, brandishing the Algerian flag that has been a mainstay of the protests that ended the rule of President Abdelaziz Bouteflika in April.

The ailing leader stepped down on April 2 under pressure from the army after mass protests that began in February, demanding an end to his 20-year rule and calling for his ruling elite to be held to account for corruption.

In Friday’s protest, huge crowds demanded the departure of interim President Abdelkader Bensalah and Prime Minister Noureddine Bedoui, who they see as part of the old guard that has run the North African country since independence from France in 1962.

Some also carried the Amazigh colours despite a ban on the minority’s flag imposed this week by the army chief, General Ahmed Gaid Salah.

“No to regionalism, we are all brothers,” the protesters chanted.

They also held up banners directed ruling elite, saying: “Thieves, you have destroyed the country.” Others read: “Algeria is a free and democratic country”.

There were skirmishes between protesters and the police, who fired tear gas at demonstrators.

Police earlier arrested dozens of demonstrators, especially those carrying the Amazigh colours, from around the capital’s main post office, the epicentre of demonstrations since they first broke out in February.

On previous Fridays in recent weeks, those detained have been released at the end of the day. There was no comment from the authorities.

Some protesters denounced the confiscation of the Amazigh flag.

“It’s a suppression of free expression, a violation of identity and a provocation attempt,” a protester said in central Algiers.

The Amazigh make up around 10 million of Algeria’s 42.2 million population.

Algeria‘s constitution, adopted in 2016, recognizes the Amazigh language along with Arabic as the North African country’s official languages.

In a speech on Tuesday, Salah contended that those who oppose the army were “enemies of Algeria”, resisting calls by the protest movement and an association of trade unions for a maximum one-year political transition overseen by new and independent interim institutions.

He warned that any political transition outside the existing constitutional order was tantamount to suppressing “all state institutions … and the destruction of the foundations” of the state.

Although a wave of anti-corruption investigations have been launched, demonstrators have kept up calls for the entire government surrounding Bouteflika to quit.

“Gaid Salah is scared of the [proposed] transition because he would not be able to control everything”, protester Salim Hassani said in Algiers.

Another demonstrator, Ahmed Meshdall, said, “It is not in the interests of Algerians to destroy the institutions.”

“A transition provides a path to elections without the mafia” currently in power, he added.

Authorities have postponed a presidential election previously planned for July 4 because of a lack of candidates, with no new date set for the vote.

Two former prime ministers last week joined a long list of prominent politicians and businessmen who have been detained as part of the corruption investigations.

The latest high-profile arrest is businessman Hassan Larbaoui, the director of a private company called Global Group, which runs a car assembly plant set up in joint venture with South Korea’s Kia Motors.

The court of first instance in Algiers ordered Larbaoui to be arrested, along with the head of state bank Banque Nationale d’Algerie (BNA) and two industry ministry officials, state radio reported. 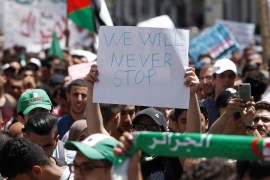 Those who oppose military are ‘enemies of Algeria’: Army chief