He has not been charged but joins a series of senior figures associated with former president Abdelaziz Bouteflika to face investigations since protests broke out this year demanding the departure of the ruling elite and prosecution of former officials linked to Bouteflika.

State television gave no details on Djoudi’s case and his lawyer was not immediately available for comment.

His hearing on Sunday came days after the same court ordered the detention of ex-prime ministers Ahmed Ouyahia and Abdelmalek Sellal, as well as former trade minister Amara Benyounes for “dissipation of public funds and awarding illegal privileges”.

The army is now the main player in Algerian politics after Bouteflika stepped down two months ago and its chief of staff Ahmed Gaed Salah has urged the judiciary to speed up the prosecution of people suspected of involvement in corruption cases.

Djoudi served as finance minister under Ouyahia from June 2007 to May 2014 when he resigned on health grounds before being named Bouteflika’s adviser for the past two years.

The legal moves have not prevented further demonstrations by protesters pushing for radical change and a clean break with an elite who have governed the North African country since independence from France in 1962.

For the 17th straight week, tens of thousands of people took to the streets in the capital on Friday to demand the removal of the ruling elite.

Bouteflika stepped down on April 2 under pressure from the army and protests that erupted in February.

Bouteflika’s youngest brother, Said, and two former intelligence chiefs have been placed in custody by a military judge for “harming the army’s authority and plotting against state authority”.

Several prominent businessmen, some of them close to Bouetflika have been detained at a prison in Algiers over corruption allegations.

Protesters are now seeking the departure of interim President Abdelkader Bensalah and Prime Minister Noureddine Bedoui, both seen as part of the establishment.

Authorities have postponed a presidential election previously planned for July 4, citing a lack of candidates.

Protesters rejected an offer from Bensalah to hold a dialogue with all parties after the postponement of the election.

No new date has been set for the vote. 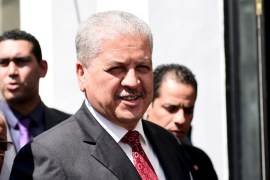 Abdelmalek Sellal is the second former prime minister to be detained over alleged corruption in two days. 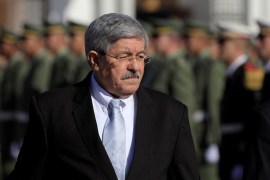 Ahmed Ouyahia and a former minister detained after appearance in front of top court over corruption allegations. 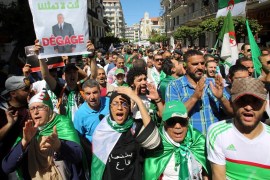 Abdelkader Bensalah calls for an election date to be set ‘as soon as possible’ days after planned vote was pulled. 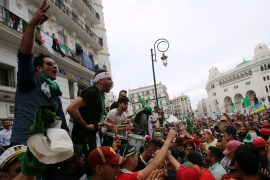 Algerians march for 14th consecutive week as authorities set up fences in front of the capital’s Grand Post Office.