Hong Kong, China – Riot police fired tear gas, water cannon, and pepper spray after thousands of protesters surrounded the legislature and forced a delay in a debate over a controversial extradition bill.

What was a relatively peaceful demonstration erupted on Wednesday at about 3:30pm local time (07:00GMT) as hundreds of protesters tried to storm the legislative council complex, prompting police to retaliate.

Black-shirted protesters wearing helmets and goggles taunted police outside the complex as they descended on the streets against the bill which, critics say, will undermine the city’s civil freedoms in its “one China, two systems” structure.

The frontline of demonstrators in hard hats, their faces covered with masks, moved metal crowd control barriers, ignoring police pleas to stop. After several failed attempts, the crowd gained access to the grounds of the building and the police released more tear gas to push them back.

After the majority of the crowd was dispersed, about 100 demonstrators could be seen donning gas masks and holding their ground at one section of the complex.

People in Hong Kong have chafed against what they see as the mainland’s increasing influence over the city.

Roads and pedestrian overpasses surrounding the legislature building in the heart of the city were crowded with thousands of protesters, ringed in by lines of police clad in riot gear, at about 8:30am (00:30GMT).

Near the main vehicle entrance to the complex, protesters engaged in shouting matches with the police, daring them to use pepper spray to force them to disperse.

A hardcore few threw crowd-control barriers in a heap outside the gate, just metres away from the line of police, which shifted inward, tightening ranks as one officer warned the police would use crowd-control measures.

Protesters pushed foward against the police line to be met with sporadic jets of pepper spray.

Mark, a 20-year-old student from Lingnan University who preferred only to share his first name, told Al Jazeera he had joined the protests against the bill because he did not trust China.

“The rule of law is central to Hong Kong,” he said beneath cloudy, humid skies. “China is very sneaky. They promised us direct suffrage [to elect the chief executive] but then took it back.”

He said he doubted students would repeat the weeks-long sit-in known as Occupy that brought Hong Kong to a standstill in 2014.

“Now people have different ideas,” he said. “There are more aggressive ways to fight for our freedom.”

The mass gathering comes as the 70-seat legislature, where pro-Beijing lawmakers have the majority, prepared to debate the contentious Fugitive Offenders and Mutual Legal Assistance in Criminal Matters Legislation (Amendment) Bill, which has been tabled for a second reading following some revisions that are supposed to ensure better human rights safeguards.

Strikes and transport go-slows were announced for Wednesday as businesses, students, bus drivers, social workers, teachers and other groups converged in a last-ditch effort to block the bill.

Business owners took to social media using a hashtag that translates as “#612strike” – the date of the proposed action – to announce closures in solidarity.

Earlier a top government figure warned the demonstrators to disperse in the first official reaction.

“I also urge citizens who have gathered to show restraint as much as possible, disperse peacefully and do not defy the law,” he said in a video message.

Ministry spokesman Geng Shuang told a news briefing in Beijing that any actions that harm Hong Kong are opposed by mainstream Hong Kong public opinion. He also urged the United States to speak and act with caution regarding Hong Kong.

Many in the former British colony, which was returned to China in 1997, are concerned the bill will undermine the independence of Hong Kong’s legal system and put the territory’s citizens and foreign nationals at risk by allowing suspects to be sent for trial in mainland China.

Chief Executive Carrie Lam, the territory’s top official, has insisted she must press ahead with the bill despite Sunday’s mass protest when more than one million people took to the city’s streets. The government put the figure at about 240,000.

“We will be deep in a place where foreign investors are afraid to invest and tourists are afraid to go. Once the ‘Pearl of the Orient’, [it] will become nothing.”

While Hong Kong is part of China, the territory enjoys a high degree of autonomy from Beijing, thanks to the “one country, two systems” formula agreed by the outgoing British administration and the Chinese government at the time of the handover.

Article 4 of the Basic Law, the de-facto constitution which forms the basis of Hong Kong’s autonomy, promises to “safeguard the rights and freedoms of the residents of the Hong Kong Special Administrative Region and of other persons in the Region in accordance with law”.

Part of this autonomy also comes in the form of the city’s independent judiciary, which critics of the proposed changes argue would be eroded if Beijing had the right to request those accused of crimes in the mainland be handed over.

China’s government insists it was not instrumental in the move to change the law, but this week claimed “foreign forces” were trying to damage the country by creating chaos over the extradition bill.

The mainland has been blamed for obstructing democratic reforms and interfering in local elections. In 2015, five Hong Kong-based booksellers who specialised in works critical of Chinese leaders disappeared only to emerge months later on China’s state-run television confessing their alleged crimes.

A 60-year-old engineer who preferred to be known as Chu said he had come to the protest with his wife and two friends, to show support for Hong Kong’s young people.

“[We need] justice, especially for the younger generation,” he said. “We don’t just support the students, we support Hong Kong.”

He doubted their efforts would have much effect on Lam. but was not deterred. 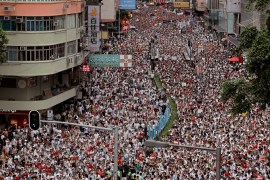 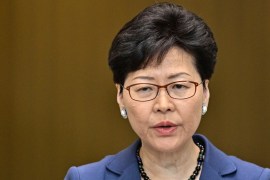