A public inquiry report leaked to Canada’s national broadcaster has called disappearances and murders of possibly thousands of indigenous women over recent decades a “Canadian genocide”.

The report, details of which were released by CBC on Friday, concluded that indigenous women and girls faced a disproportionately high level of violence through “state actions and actions rooted in colonialism and colonial ideologies”.

The 1,200-page final report is set for public release on Monday at a ceremony attended by Prime Minister Justin Trudeau – who has made reconciliation with Canada’s 1.6 million indigenous peoples a government priority – and families of the victims.

According to official estimates, almost 1,200 indigenous women and girls went missing or were killed between 1980 and 2012.

But commissioners with the National Inquiry into Missing and Murdered Indigenous Women and Girls have said that figure is probably too low.

“We do know that thousands of indigenous women, girls and 2SLGBTQQIA (two-spirit, lesbian, gay, bisexual, transgendered, queer, questioning, intersex and asexual) have been lost to the Canadian genocide to date,” said the report, titled “Reclaiming Power and Place”.

“The fact that First Nations, Inuit and Metis peoples are still here and that the population is growing should not discount the charge of genocide.”

The report added that due to “the gravity of the issue,” the inquiry was preparing a “supplementary report on the Canadian genocide of indigenous peoples according to the legal definition of genocide, which will be posted at a later date.

The inquiry was the culmination of years of lobbying by native leaders, activists and victims’ families seeking to know why possibly thousands of indigenous women were murdered or have gone missing over the past three decades.

Indigenous women represent four percent of Canada’s population but accounted for up to 16 to 24 percent of homicide victims during the period, said the report’s authors. The commissioners held 24 hearings across Canada over the past 2.5 years and heard from more than 2,000 witnesses, including family members of missing or murdered women, survivors of violence, experts and officials. 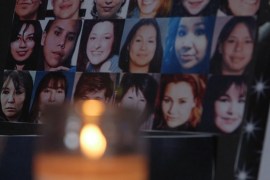 Fault Lines looks at what’s behind the crisis of missing and murdered indigenous women in the US.