“Elements” in the Trump administration are pushing for war between the United States and Iran – a scenario that would be catastrophic for the Middle East, an Iran official warned.

Fears of conflict erupting in the Gulf region have grown in recent weeks amid fiery rhetoric from both sides after the US deployed an aircraft carrier strike group, B-52 bombers, and 1,500 more American troops citing unidentified Iranian “threats”.

On Wednesday, the semi-official ISNA news agency quoted Iran’s Deputy Foreign Minister Abbas Araghchi as saying: “We are aware that evident elements are trying to put America into a war with Iran for their own goals.”

He accused US National Security Adviser John Bolton – who has called for “the overthrow of the mullahs’ regime in Tehran” – and “other warmongers” of plotting against Iran, the Mehr news agency reported.

“War would be a disaster for everybody in the region. We hope that wisdom will prevail in Washington, that they do not make this biggest mistake in the region ever. But we are fully prepared for that scenario,” Araghchi said.

An escalation in hostility has followed the US pullout from the historic nuclear agreement signed by Iran and world powers.

Iran’s Supreme Leader Ayatollah Ali Khamenei said on Wednesday his country will not re-negotiate with the US over its nuclear and missile programmes, after President Hassan Rouhani signalled talks with Washington might be possible if sanctions were lifted.

Washington withdrew last year from the international nuclear deal signed with Tehran in 2015, and it has ratcheted up sanctions in efforts to shut down Iran’s economy by ending its international sales of crude oil.

Earlier in the day, Rouhani had taken a more positive stance.

“Whenever they lift the unjust sanctions and fulfil their commitments and return to the negotiations table, which they left themselves, the door is not closed,” he said. “But our people judge you by your actions, not your words.”

Khamenei has the final say in all major policies under Iran’s dual system, split between the clerical establishment and the government. He is also the head of the armed forces.

US President Donald Trump condemned the landmark nuclear accord, signed by his predecessor Barack Obama, as flawed for not being permanent and for not covering Iran’s ballistic missile programme and role in conflicts around the Middle East.

Trump said on Monday he was hopeful Iran would come to negotiating table. “I really believe that Iran would like to make a deal … and I think that’s a possibility to happen.”

Speaking with reporters, acting US defence chief Patrick Shanahan said the 1,500 additional troops announced last week would be going to Saudi Arabia and Qatar. Without giving details or evidence, Shanahan said while the Iranian posture had changed recently, the threat remained.

He added boosting military assets into the region had helped deter attacks against Americans in Iraq.

Earlier on Wednesday, Bolton said the “prudent and responsible” approach taken by the US made it clear to Iran and its proxies not to engage American interests.

“I support what we are doing so far. The point is to make it clear to Iran and its surrogates that these kinds of activities risk a very strong response from the Americans,” he said in Abu Dhabi.

“We are very concerned about the Quds Force … using Shia militia groups and others in Iraq as indirect ways to attack our embassy in Baghdad, consulate in Erbil, our various bases around the country,” he said.

The US Combined Air Operations Center is based in Qatar and its navy Fifth Fleet in Bahrain. The US Air Force also uses al-Dhafra airbase in Abu Dhabi.

During Bolton’s visit, the US and United Arab Emirates announced that a defence cooperation agreement signed earlier this year had come into force “at a critical time”, a joint statement said.

An emergency summit begins on Thursday in Saudi Arabia that will focus on regional security issues amid the soaring tension between Iran and the US and its Gulf allies. 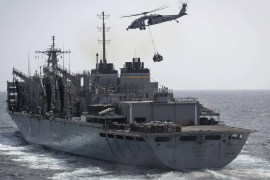 Iran set for dialogue with Gulf neighbours as tensions soar

Comments by Iranian official in Qatar come as John Bolton arrives in UAE for talks on ‘important security matters’. 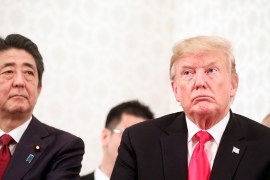 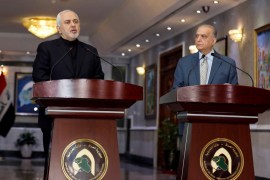 Iran will defend itself against any aggression: FM Zarif