Thunderstorms kicked off across much of the southern Arabian Peninsula this weekend after hot and humid conditions in the region.

In Oman, images out of Muscat’s international airport showed very strong downpours on Sunday evening. Visibility was reduced to several hundred metres and flights were delayed while the storms moved through.

A bit further south in Oman, the town of Sur has picked up 66mm of rain in the last 48 hours. This is well above average for the month of May when the town would normally only see about 1.7mm.

The Public Authority for Civil Aviation in Oman also warned about the threat of flooding near the wadis.

Many parts of Yemen’s capital, Sanaa, were flooded by the heavy rain with water levels in lower-lying areas reaching the door handles.

Other parts of Yemen have reportedly been flooded as well. Flash flooding was likely in the mountainous areas.

Parts of the UAE also saw a few storms rumble through as well. Dubai and Abu Dhabi reported a quick downpour across the cities on Sunday evening, but the storms moved through quickly enough that no significant problems were reported on the roads.

Showers and thunderstorms will again develop during the heat of the day today and tomorrow over Oman and Yemen, continuing the risk for flooding. 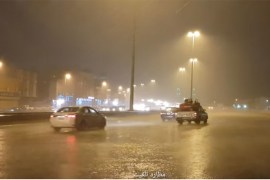 Four days of thunderstorms across Mecca, a city that receives just 22mm of rain on average every year.