Turkish President Recep Tayyip Erdogan has welcomed a controversial order to rerun the recent Istanbul local elections after complaints of corruption, claiming a new poll was the “best step” for the country. The opposition has called it a “blow to democracy”.

The country’s high election board said on Monday some ballot box committees were formed illegally by district election board members who would face criminal complaints.

Main opposition candidate Ekrem Imamoglu was initially declared Istanbul’s new mayor on April 17 after winning the race by a small margin, pending an “extraordinary objection” for a rerun by Erdogan’s party.

The ruling Justice and Development (AK) Party alleged voting irregularities made the results invalid, and said that they had presented the related evidence to the board. The opposition said the AK Party’s claims were baseless and the ruling party was pressuring the election authority.

On Monday the election commission ordered that the vote for Istanbul’s mayor should be redone.

“We see this decision as the best step that will strengthen our will to solve problems within the framework of democracy and law,” Erdogan said, in a speech to legislators from his AK Party in parliament on Tuesday.

Erdogan slammed those criticising the decision to repeat the election now scheduled for June 23, saying they should know their place. He added that Binali Yildirim, a former prime minister, will once again be the AK Party’s candidate in the polls.

One of the critics was German Foreign Minister Heiko Maas, who said the decision to scrap the vote was “not transparent and not comprehensible”.

In a statement, Maas said Turkish voters alone must decide on the mayor’s office, adding that basic democratic principles and transparent election rules were paramount.

The main opposition Republican People’s Party (CHP) has also condemned the decision as “neither democratic nor legitimate” but said it will not boycott the rerun.

The CHP said that its candidate Imamoglu will run in the June 23 polls.

Following the election board’s announcement, opposition supporters took to the streets in some parts of Istanbul to protest the commission’s decision.

With an estimated 2.9 million people of either Turkish citizenship or recent ancestry, Germany is home to the largest Turkish diaspora community worldwide.

But the close links between the two countries are also a source of tension, with German politicians regularly blasting what they see as illiberal moves by Erdogan.

Ege Seckin, an analyst with HIS Country Risk, said the move by the election board casts shadow on the elections in Turkey.

He told Al Jazeera from London: “This is something we had not seen in Turkey until now. The decision casts shadow on the integrity of the ballot box in the country, which was something relatively safe, as some would claim, from the authoritarian tendencies of the government.”

“It is definitely a bad sign for what may come. And it potentially creates a discouragement for the integrity of future elections.” 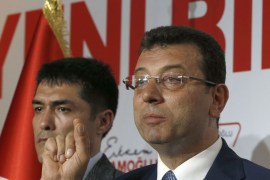 President Erdogan’s party had lodged a complaint and demanded the rerun of the neck-and-neck race in the metropolis. 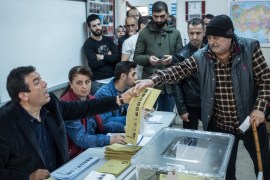 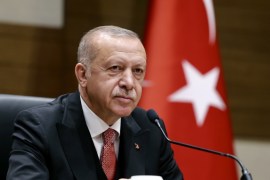