Palestinian officials say a ceasefire agreement has been reached with Israel to end a surge of violence in the Gaza Strip and southern Israel that has led to the deaths of at least 25 Palestinians and four Israelis.

Gaza officials confirmed to Al Jazeera that a deal was reached at 1:30 GMT, and no Israeli air raids on the Palestinian territory have been reported since the deal came into effect.

The officials said Egypt and Qatar helped mediate an end to days of attacks between Gaza and Israel.

There was no confirmation from the Israeli side. However, the Israeli army early on Monday lifted all protective restrictions imposed near the Gaza area during the weekend’s flare-up.

The Home Front Command instructed residents of the south to return to their routines.

The Israeli Transportation Ministry announced that all public bus routes in the south would return to full and normal operation. The railway line between the cities of Ashkelon and Beersheba was also set to resume later in the morning.

An Islamic Jihad official, on condition of anonymity, said the truce agreement was based on Israel easing its blockade of the Gaza Strip.

Among the steps, he said, were the easing of limits on the fishing zone to 12 nautical miles off the coast of Gaza and improvements in Gaza’s electricity and fuel situation.

An Egyptian official also confirmed the deal on condition of anonymity.

The prime minister of the occupied West Bank-based Palestinian Authority government Mohammed Shtayyeh said on Monday that the government welcomed “any effort for a ceasefire, especially the Egyptian efforts.”

“We are hoping that this will lead to an end to the tragedy against our people and preserve their lives,” he said, speaking at a government meeting in the city of Ramallah.

Shtayyeh called on the United Nations to stop Israeli aggression against Palestine and to provide international support for its people in the Gaza Strip.

The flare-up was the most serious clash between the two sides since a spate of fighting in November.

Rocket sirens in southern Israel, which had gone off continuously over the weekend, sending residents running for cover, were quiet for a few hours straight before dawn on Monday.

On Sunday, Israeli Prime Minister Benjamin Netanyahu had ordered “massive strikes” on the Gaza Strip after a two-day escalation in which Israeli warplanes and gunboats targeted Gaza as fighters in the besieged enclave fired a barrage of rockets into southern Israel.

A 34-year-old Hamas commander was killed on Sunday in what the Israeli military described as a targeted strike.

An army statement accused Hamad al-Khodori of “transferring large sums of money” from Iran to armed factions in Gaza.

Other Palestinian victims included two pregnant women and two infants. In Beit Lahiya, a town in the northern Gaza Strip, an Israeli air raid hit a residential building, killing a four-month-old baby and her father.

A 12-year-old boy, Abdelrahman Abu al-Jadyan, was also killed in the same attack. The bodies of his parents, Talal and Raghda, were recovered under the rubble on Monday, bringing the death toll in the Gaza Strip to 25 killed.

In the Israeli city of Ashkelon, a 58-year-old Israeli man was killed after being struck by shrapnel from a rocket attack. Two other Israelis, critically wounded in a separate rocket attack on a factory on Sunday afternoon, later died.

Around two million Palestinians live in Gaza, the economy of which has suffered years of Israeli and Egyptian blockades as well as recent foreign aid cuts and sanctions by the Palestinian Authority, Hamas’ West Bank-based rival.

Israel said its blockade was necessary to stop weapons reaching Hamas, with which it has fought three wars since the group seized control of Gaza in 2007, two years after Israel withdrew its settlers and troops from the area. 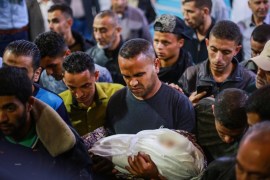 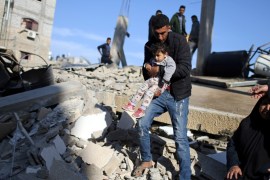 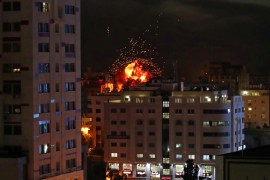