South Korea’s military has bolstered its surveillance in case there are additional weapons launches, and South Korean and United States authorities are analysing the details.

That year saw a string of increasingly powerful weapons tests from North Korea and a belligerent response from US President Donald Trump that had many in the region fearing war.

Analysts said that no matter what type of projectile was fired, the timing of North Korea’s latest action sent a message after the failed summit between North Korea’s leader Kim Jong Un and President Trump in February when the two disagreed over weapons dismantlement and sanctions relief.

“It is an expression of the North’s frustration over stalled talks with the United States. It is a message that it could return to the previous confrontational mode if there is no breakthrough in the stalemate,” Yang Uk, a senior research fellow at the Korea Defence and Security Forum, told Reuters news agency.

“We are aware of North Korea’s actions tonight. We will continue to monitor as necessary,” White House Press Secretary Sarah Sanders said.

US Secretary of State Mike Pompeo and South Korean Foreign Minister Kang Kyung-wha agreed to “cautiously respond” to the latest firing and to continue communications during a phone call on Saturday, South Korea’s foreign ministry said in a statement.

“At this point, we have not confirmed any situation where Japan’s national security would immediately be affected,” Japan’s defence ministry said in a statement.

North Korea’s vice foreign minister said on Tuesday the US would face “undesired consequences” if it fails to present a new position in denuclearisation talks by the end of the year.

North Korea did not carry out any missile or nuclear tests last year, as Kim held his first historic summits with the leaders of the US and South Korea.

During a summit with Russian President Vladimir Putin in late April, Kim said that peace and security on the Korean Peninsula depended on the US, warning that a state of hostility could easily return, according to North Korean media. 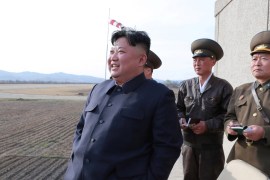 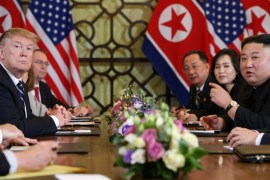 North Korea must deliver ‘blow’ to those imposing sanctions

North Korean leader places emphasis on ‘self-sustainability’ following failure to have sanctions lifted by the US.