A Vietnamese woman who spent more than two years in a Malaysian prison on suspicion of killing the half-brother of North Korea’s leader has been freed and returned to Vietnam.

Doan Thi Huong, 30, was charged along with an Indonesian woman of poisoning Kim Jong Nam by smearing his face with liquid VX, a banned chemical weapon, at Kuala Lumpur airport in February 2017.

Malaysian prosecutors dropped a murder charge after she pleaded guilty to a separate charge of “causing injury”.

“I feel happy when returning to my country,” said Huong, who said she was looking forward to heading to her family home, a small town in the province of Nam Dinh, 130 kilometres (80 miles) from Hanoi.

Ahead of her arrival, Huong’s father, Doan Van Thanh, told Reuters news agency he was planning to celebrate his daughter’s return with a large party in their village.

“We will slaughter some pigs for the party. My daughter particularly likes fried fish, so we will prepare that too,” Thanh said.

Huong’s three Malaysian lawyers shared a letter she had written in prison on Thursday thanking the Malaysian and Vietnamese governments, her lawyers and all those who had supported her over the past two years.

“I thank so much for everybody pray for me in the church and at home as well,” she wrote signing the letter with her name and a heart.

Weeks earlier, Indonesian Siti Aisyah – the only other person to face trial over the killing – was released and flew home after her murder charge was withdrawn.

The pair always denied having committed murder, arguing that they were pawns in a plan hatched by North Korean agents who fled Malaysia after the killing.

Other suspects in the killing of Kim Jong Nam have escaped justice.

Al Jazeera’s Investigative Unit has obtained exclusive pictures of the man believed to be the chemist who prepared the VX nerve agent that killed Nam.

In exclusive video thought to be captured in late 2017, he is seen, relaxed and happy while singing Karaoke in a restaurant in China with his wife and friends.

“There was a golden opportunity to hold them accountable,” Hoo Chiew Ping of the National University of Malaysia told Al Jazeera.

“We have completely lost that.”

While there is relief for the women – who said they believed they were taking part in a TV show prank – those behind the plot are unlikely to ever face justice.

“The assassins have not been brought to justice,” said Hisyam, adding the women’s legal teams consistently argued their North Korean handlers were the real murderers.

The pair were arrested after they were captured on airport CCTV cameras walking up behind Kim, as he waited for a flight, and one was seen clasping her hands over his face.

Kim, heir apparent to North Korea‘s leadership until he was exiled from his homeland, died in agony shortly afterwards, his face smeared with poison.

The defence stage of the case was due to start in March, but in a shock move, prosecutors announced they were withdrawing the murder charge against Aisyah, 27, and she flew back to Jakarta.

Her release followed intense diplomatic pressure from Indonesia, including from President Joko Widodo.

Vietnam then stepped up pressure for Huong’s murder charge to be dropped. Their initial request was refused, but at the start of April prosecutors offered her a reduced charge, paving the way for her release. 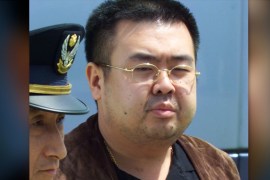 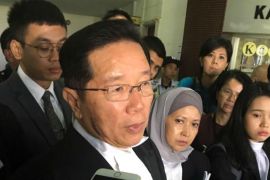