Thousands of opposition and pro-government supporters rallied in Venezuela on Wednesday, a day after opposition leader Juan Guaido called for the military to oust President Nicolas Maduro.

“If the regime thought we had reached maximum pressure, they cannot even imagine,” Guaido told thousands of supporters in eastern Caracas. “We have to remain in the streets.”

Maduro also called for his supporters to take to the streets. On Twitter, he said that foreign interference was not the way forward in Venezuela.

“It was demonstrated that interference, coups and armed confrontations are not the way for our beloved Venezuela,” Maduro wrote.

“The route to settle differences will always be constitutionality and mutual respect,” he added.

In the western part of Caracas, Venezuelans banged drums and carried banners that called for “freedom”. On a highway close to an airbase in the east of the capital, government forces fired tear gas on protesters.

The United Nations (UN) said it was “worried” by reports of security forces using “excessive” force against demonstrators.

“In light of the mass protests planned for today, we call on all sides to show maximum restraint and on the authorities to respect the right to peaceful assembly. We also warn against the use of language inciting people to violence,” it said in a statement.

Maduro supporters marched wearing red, and the party’s leaders said Wednesday’s results were a result for the government.

“Yesterday, hate and improvisation prevailed; nobody knows who is leading today,” Diosdado Cabello, president of the National Constituent Assembly, said during the march.

Guaido’s choice of International Workers’ Day for the major protest came as he tried to win the support of union leaders, who comprise a traditional base that has always shown support for Maduro and his socialist party.

The protest participation provided a test for Guaido’s plan to overthrow Maduro, a day after the opposition leader called for a “military uprising” in his strongest move since invoking the constitution to declare himself interim president on January 23.

“This is the time to go out and protest,” Rachid Yasbek, an opposition leader, told Al Jazeera.

“Somehow there has been some fragmentation within the government structure; it would be a mistake to stop,” he added.

Maduro has accused the United States and Guaido of staging a “coup”. On Tuesday night, the socialist president declared victory over the uprising, saying the opposition’s move will not go unpunished.

Although Guaido has earned the backing of the US and dozens of other Western countries, Maduro holds the support of the armed forces and Russia, China, Iran, Turkey and Cuba.

Some analysts believe the events of the last week may have little effect on the political crisis.

“Despite the rise of a group of soldiers against Nicolas Maduro, the Venezuelan government continues to count on the decisive support of this sector, which allows it to continue to exercise the power in Venezuela,” Carlos Pina, a political analyst in Venezuela, told Al Jazeera.

“The opposition has also recovered the street pulse, [with many] feeling encouraged by the return of Leopoldo Lopez to the political scene,” he added. “Maduro still has a strong and organised structure of mobilisation of his bases, which has allowed his regime to counter the efforts of the opposition.”

“The opposition is still betting on generating news,” he told Al Jazeera. “But they haven’t yet achieved the popular support they need to force a change in the structure.”

Meanwhile, Venezuela‘s living standards have declined this year with a series of blackouts and water shortages adding stress to an already difficult situation for many facing hyperinflation and food and medicine shortages.

“I went out because I’m convinced this is the right path; half of my life I have lived it under the Chavismo,” Antonia Lapadom told Al Jazeera.

Government supporters say they are also ready to support the revolution, arguing that the current situation is a consequence of foreign intervention.

“I am advocating for the liberty of my country, [external forces] can’t run over it and keep threatening it. We are a free country with free lands, free men, and we [would] rather stand than to be on our knees,” Julio Cesar Acevedo, 66, said.

But protesters also admitted there was fear.

“We are afraid, yes, but I think that every time there is an opportunity for a change, where you can help, we have to take it, because we don’t know when will it come again,” Lapadom said.

The UN says a quarter of Venezuela’s 30 million people are in urgent need of humanitarian aid, and that 3.7 million are malnourished.

And while not all are convinced the opposition offers the best solutions, many are eager to see change.

“I think this is the time to support the only people that seems to be eager to make a change, [and] I don’t see anyone else trying,” Manuel, a Venezuelan citizen, told Al Jazeera.

“We need to go out, we can’t keep risking Venezuela, this country needs to be rescued,” he said. 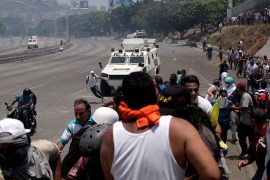 What’s next for Venezuela after ‘attempted coup’?

President Nicolas Maduro vows to prosecute those behind dramatic attempt to remove him. 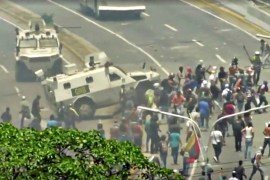 Tension grows between US and Russia over Venezuela standoff

US and Russia trade warnings as crisis in Venezuela intensifies a day after the opposition called for military uprising. 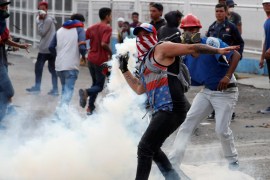 President Maduro declares victory over alleged coup attempt saying those behind it will not go unpunished.