The comments by UAE’s minister of state for foreign affairs, Anwar Gargash, came as lawmakers loyal to Libya’s UN-recognised government on Thursday denounced Haftar’s attack on Tripoli and defended their record in fighting “terrorism”.

The UAE, along with Egypt, support Haftar, who they see as a bulwark against armed groups in North Africa. A 2017 UN report said that the UAE has provided Haftar’s eastern-based Libyan National Army (LNA) with military and logistical support.

Haftar’s offensive launched more than three weeks ago to seize Tripoli has all but wrecked UN-backed efforts for a peace deal between the rival factions to end eight years of conflict.

Last February, Abu Dhabi hosted talks between Prime Minister Fayez al-Sarraj and Haftar, whose forces control Libya’s eastern half, where the two agreed on the need for national elections.

“Abu Dhabi agreement offered opportunity to support the UN-led process. Meanwhile extremist militias continue to control the capital and derail the search for a political solution,” Gargash said in a Twitter post on Thursday.

The assault by the LNA – the biggest military confrontation in Libya since the 2011 toppling of leader Muammar Gaddafi – stalled on Tripoli’s stoutly defended southern outskirts last week. But fighting has intensified again with both sides using heavy artillery.

Several legislators from the UN-recognised Government of National Accord (GNA), based in Tripoli, spoke at a meeting staged in the beleaguered city to condemn Haftar’s assault on the capital.

“We are here for the rejection of the offensive,” lawmaker Hamouda Siyala told Reuters news agency.

Some parliamentarians appeared to be incensed by the UAE’s “extremism” allegation, although they did not mention the Gulf state.

“Which terrorism are you speaking about?” asked another lawmaker, Aisha Shalabi, whose speech was interrupted by attendees shouting “Allahu Akbar”.

“[We] fought it in Sirte … If you speak about militias, they are our sons who toppled Gaddafi,” she said, referring to a city where the Islamic State of Iraq and the Levant (ISIL or ISIS) was driven out by Libyan militias.

Libya split in 2014 into rival administrations, and the Tripoli conflict has scuppered plans by the United Nations to hold elections to produce a national government and parliament.

‘Own man, own goals’

The UN report issued in June 2017 said Haftar’s forces had received aircraft and military vehicles from the UAE, which also built an airbase at Al Khadim, allowing the LNA – which is allied to the parallel government based in Benghazi – to gain air superiority by 2016.

“Today, he [Haftar] is his own man and trying to achieve his own goals,” the source said.

Since the Tripoli offensive began, 376 people have been killed in the fighting, including 23 civilians, and 1,822 wounded, 79 of them civilians, according to latest United Nations figures. More than 45,000 people have fled their homes. 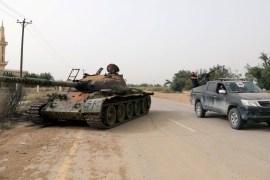 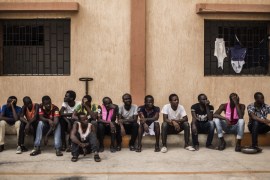 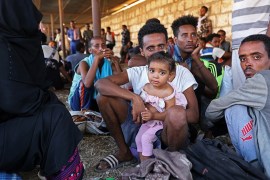 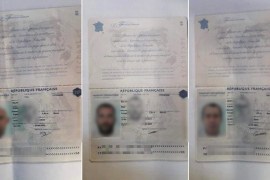 Armed men crossing from Libya alleged to be French spies

Tunisia’s presidency denies report that group with diplomatic passports who attempted to enter was French intelligence.