Hundreds of Venezuelans rallied on Tuesday after opposition leader Juan Guaido called for a “military uprising” in his strongest move to take down President Nicolas Maduro since declaring himself interim president earlier this year.

Guaido, in a video posted on Twitter earlier on Tuesday, said he had started the “final phase” of his campaign to remove Maduro from power, calling on Venezuelans and the military to back him.

He was surrounded by individuals in military uniforms and opposition politician Leopoldo Lopez in Venezuela, who has been under house arrest since being found guilty of inciting violence during anti-government protests in 2014.

Guaido said he was at the Caracas airbase La Carlota and called for people to come out in support as well.

“The time is now,” Guaido said. “We are going to achieve freedom and democracy in Venezuela,” he added, urging supporters to take to the streets.

Shortly after, a small group of armed troops, who had appeared to pledge their support to Guaido, briefly clashed with soldiers supporting Maduro. Protesters and security forces also clashed. Video from Reuters showed a National Guard vehicle running over some protesters. And residents in different areas of Caracas also reported hearing the gunshots in the streets. There were reports of dozens of injuries.

But by Tuesday afternoon, most of the clashes had ended, with Maduro’s government saying they were in full control and had the support of the military.

“What took place today is an act of hostility” Giuseppe Yoffreda, Venezuela’s Ambassador in Qatar said.

“They are trying to execute a coup as a desperate attempt that seeks to [distract] and hide a lack of leadership,” he added.

In Caracas, Maduro’s supporters rallied, chanting slogans of support while some people were giving out posters of Maduro with the Venezuelan flag behind him.

“Here we are in support of our President Nicolas Maduro, and in support of our beloved homeland … this is a glorious town and our inheritance is freedom,” Areli Rodriguez, 63, a Venezuelan lawyer said from outside the Miraflores Palace, the presidential office.

Other supporters said they went out to support the revolutionary process.

“The opposition in Venezuela is fascist, they do not have the streets, they do not have support and that’s why their only alternative is violence, coups,” Gabriel Rodriguez, a singer and government supporter in Miraflores said.

Hundreds of opposition supporters also responded to Guaido’s call and went out to La Carlota, and other neighbourhoods in Caracas.

“I went out because we need to support the opposition to stop the usurpation of power,” Tony Pompa, an opposition supporter told Al Jazeera.

“I believe that by going out to the streets we will show to the world that we are here, and we want an end to this dictatorship,” he said.

Meanwhile, Guaido also reiterated his calls for “the largest march in Venezuela’s history” on Wednesday.

Venezuela is immersed in a deep economic crisis. Hyperinflation, unemployment and food and medicine shortages have prompted more than three million Venezuelans to leave the country in recent years.

Guaido in January invoked the constitution to declare himself interim president, arguing that Maduro’s re-election in 2018 was illegitimate.

The United States and 50 other mostly Western countries have recognised Guaido while Russia, China, Turkey and Cuba back Maduro.

On Tuesday, US Vice President Mike Pence reiterated the Trump Administration’s support for Guaido in a tweet, saying “We are with you!”

Senior US officials also declared their full support, with Senator Marco Rubio urging Venezuelans to take to the streets.

After years of suffering freedom is waiting for people of #Venezuela. Do not let them take this opportunity from you.

Now is the moment to take to the streets in support of your legitimate constitutional government.

Do not allow this moment to slip away. It may not come again

US National Security Advisor John Bolton called on the three senior aides to Maduro, who Bolton said had been working with the opposition, to make good on their commitment.

“It’s still very important for three figures in the Maduro regime who have been talking to the opposition over these last three months to make good on their commitment to achieve the peaceful transition of power from the Maduro clique to interim president Juan Guaido,” Bolton told reporters.

Meanwhile, Russia accused the opposition of using violence in what it said was a clear attempt to draw the country’s armed forces into clashes.

“Instead of peacefully settling political differences, they have taken a course designed to whip up conflict, and provoke breaches of public order and clashes involving the armed forces,” the Russian foreign ministry said.

Although Guaido’s move on Tuesday took many by surprise, some analysts believe his action could change the course of events.

“This could lead to a different kind of dialogue,” Carlos Pina, a Venezuelan political analyst told Al Jazeera.

“It will be hard for [Maduro’s government] to sit at a negotiating table, but perhaps a larger part of the other political actors involved might be more interested in a negotiated solution, rather than a civil confrontation.”

“Something is clear, and that is that even if the government survives this attempt, it will not be able to maintain the same strategy that it has carried out so far towards Guaido and his followers. This will definitely change,” he added.

But others believe Guaido may have acted too soon without the needed public support.

“Even though the opposition went out and did everything possible, it doesn’t have enough popular support,” said Javier Buenrostro, a professor at the National Autonomous University of Mexico.

“The support it has doesn’t match the size of the action. The reaction does not make the government shake,” he told Al Jazeera.

Buenrostro said Guaido and Lopez had failed the US.

“Guaido has been telling the US he will manage to gather the needed military support, and five months later he has not achieved this yet, and despite the unconformities within the forces, the majority remains loyal,” Buenrostro said. 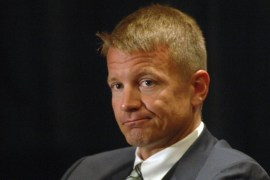 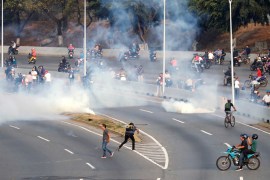