Madrid, Spain – Votes were being counted in a pivotal election on Sunday that could see a return of a far-right party in a ruling coalition for the first time since its transition to democracy.

Voters turned out in unusually high numbers, according to election authorities in Madrid.

Despite being the third election in four years, 60.7 percent of eligible voters cast their ballot by 6pm (16:00 GMT), about 9.5 percentage points more than at the same time in the last parliamentary election in 2016.

Mainland polls closed at 8pm local time (18:00 GMT), although they were extended to 9pm in certain areas. According to a survey by GAD3, published shortly after mainland voting ended, no single party was close to winning a parliamentary majority.

Prime Minister Pedro Sanchez of the centre-left Socialist Workers’ Party of Spain (PSOE) called a snap vote after his government failed to pass a budget in February.

There are five main parties that could form two possible ruling coalitions; one comprised of left-wing parties and regional nationalists, another with the traditional centre right and the far right.

Sanchez, who has reinvigorated support for PSOE after nearly a decade of losing to the mainstream right-wing People’s Party (PP), finished his campaign by saying he was open to a ruling coalition with left-wing Podemos, headed by Pablo Iglesias, in an interview with daily newspaper El Pais.

PSOE is expected to win the most seats, though come short of a majority.

Sanchez cited the “real risk of the right wing becoming one with the extreme right” as a reason to support PSOE during the interview.

PP, headed by Pablo Casado, could conceivably win a governing election with the support of the Citizens party, which considers itself centrist and liberal but is considered far right by many in Catalonia, where it was founded in 2006; and the far-right, anti-immigrant Vox.

A separatist push in Catalonia, coupled with continuing migration from Muslim-majority nations, has aided Vox, which is projected to take about 12 percent of the vote, Ignacio Jurado, a senior lecturer of politics at York University, told Al Jazeera.

Members of Vox have voiced their support for the four-decades-long fascist dictatorship of Francisco Franco, which ended in the 1970s, which was previously considered taboo in mainstream Spanish politics.

Franco’s rule was marked by a tough stance on national minorities in Spain, which is being echoed by Vox. PP and Citizens have also issued calls for limited autonomy in Catalonia, where many still hope for an independent state.

“The economic crisis and migration were possibly underlying factors that gradually created some conditions for the far right to emerge. However, it’s the Catalan crisis what has energized it,” Jurado said.

If Vox wins seats in the national parliament, it will be the first time a far-right group has held seats in the governing body since Franco’s death in 1975.

For Miguel Angel Rivera, a 20-year-old philosophy student, the talking points for Vox, PP and Citizens hold no water.

“They’re concerned with Catalonia and Franco, I’m concerned with getting a job,” Rivera, who plans to vote PSOE, told Al Jazeera. “They say the crisis is over, but we don’t feel it.”

Spain was one of the countries hardest-hit by the global recession that began in 2008. It has been declared over, and EU countries like Germany and Hungary are experiencing unemployment rates dipping below four percent.

Spain needs stability. It can't survive attacks on its territory.

Spain’s unemployment rate sits at 14 percent, according to trading economics, even as living costs increase.

PSOE and Podemos agreed to an increase in the minimum wage in 2018, which Rivera said contributed to his support for PSOE.

Maria Villalobos, a pensioner in her 70s who lives in Madrid’s trendy La Latina neighbourhood, plans to vote PP.

Casado, who has vowed to enact Article 155 of the Spanish Constitution in Catalonia, which will place it under direct rule of the national government, understands this, Villalobos said.

When asked if PP entering a ruling coalition with Vox concerned her, Villalobos replied: “I lived under Franco. It wasn’t easy, but we were Spanish. All of Spain understood that.”

Voting in the Spanish election is expected to continue through the evening, when preliminary results will be announced. 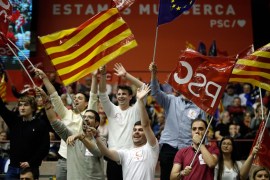 Everything you need to know about Spain’s general election

Spain to vote on Sunday against backdrop of tensions over Catalonia, as rising far right upsets traditional landscape. 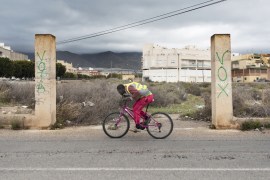 Ahead of Sunday’s election, nostalgia for the Franco regime and xenophobia are palpable in El Ejido. 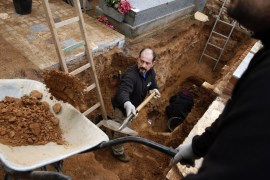