The deaths of three ethnic Rakhine men in Myanmar military custody and the secret cremation of their bodies has provoked outrage, as fears over military impunity increase in the intensifying conflict with Rakhine rebels.

The Arakan Army (AA) is fighting for more autonomy for ethnic Rakhine Buddhists in a state already infamous for the 2017 military crackdown against its Rohingya ethnic minority.

Clashes between the rebels and the military escalated in January after the armed group attacked police posts.

The armed forces responded with heavy artillery and fighter jets in violence that has displaced more than 20,000 people of various ethnicities.

Two weeks ago, Myanmar soldiers barged into the home of Maung Than Nu, 45, in Lak Ka village in Mrauk U township.

He was carted off with 22 other men, suspected of being AA members.

This week his wife, Than Khin Kyi, heard rumours on Facebook that he had died in military custody.

Officials confirmed his death on Thursday after she travelled with other relatives of the detainees to the state capital, Sittwe.

“He was arrested without committing any crimes,” the 45-year-old told the AFP in tears by phone.

Maung Than Nu died on April 22 of “heart failure” The Myawady newspaper, a military-owned publication, reported.

Two other men arrested in the raid have also died in custody.

According to The Myawady, Zaw Myo Htun, 22, also died of “heart failure”.

The death of Thein Htun Sein, 40, was confirmed by Sittwe officials, but how he died has not been made public.

The families had hoped to retrieve the men’s bodies in Sittwe, but were unable to do so.

“We were told by police they had already been cremated,” said Thein Htun Sein’s nephew Maung Nyan Thar, adding the families wanted “legal action” against anyone found responsible for the deaths.

Government spokesman Zaw Htay could not be reached for comment.

The north of Rakhine State is in strict lockdown, making any independent verification difficult.

Thousands of troops have been deployed to Rakhine, which is one of Myanmar’s poorest states and is riven with ethnic and religious divisions.

Arakan National Party MP for Mrauk U, Oo Hla Saw, called the deaths and disposal of the bodies “completely unacceptable”.

Rakhine Chief Minister Nyi Pu told relatives of the remaining detainees Friday he did not know when they would be reunited.

None have been formally charged.

Campaign group Fortify Rights called for an independent investigation into the deaths, fearing they could have been from “unlawful killing, ill-treatment or inadequate conditions in custody”.

The military forced some 740,000 mostly Muslim ethnic Rohingya into Bangladesh during its 2017 crackdown that UN investigators say amounted to “genocide”.

Ethnic Rakhine mobs were accused of aiding the expulsion.

Myanmar’s army said the “clearance operations” were justified to flush out Rohingya fighters. 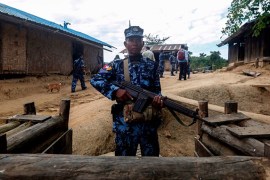 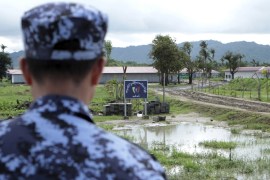 Body found two days ago with ‘gunshot wounds in his face, arm and leg’, according to government-backed media.