Russian President Vladimir Putin has met North Korean leader Kim Jong Un, who says they have had “fruitful” talks about how to resolve a standoff over Pyongyang’s nuclear programme.

Speaking after the first session of talks on the Russky Island across a bridge from Vladivostok on Thursday, Putin said he and Kim “exchanged opinions about what should be done to improve the situation”.

Kim noted that they had “discussed ways of peaceful settlement” and had “a very fruitful exchange”.

Putin and Kim met in Russia’s Far East for their first summit, with the North Korean leader looking for support in his nuclear standoff with the United States.

“We talked, of course, about the situation on the Korean peninsula, we exchanged views on how and what we can do so that there are good prospects for an improvement in the situation,” Putin said at the start of the second phase of talks, involving larger delegations from each side.

The Russian leader landed in the Pacific coast port Vladivostok on Thursday, a day after Kim’s armoured train pulled in to the city’s Tsarist-era station.

The meeting is Kim’s first face-to-face interaction with another head of state since returning from his Hanoi summit with US President Donald Trump, which broke down without a deal on North Korea’s nuclear arsenal in February.

Analysts say Thursday’s Russia-North Korea summit will serve as a reminder to Washington that the North Korean leader has other options in the region backing his leadership.

In brief statements before their meeting, both men said they were looking to strengthen ties that date back to the Soviet Union’s support for the founder of North Korea, Kim’s grandfather Kim Il Sung.

Kim will be looking for Russia’s support in easing sanctions imposed on Pyongyang over its nuclear programme, while Putin is eager to put Moscow forward as a player in another global flashpoint.

Earlier, after arriving in Russia on Wednesday, Kim said he hoped for a “successful and useful” summit.

Kim’s key concerns for the summit are North Korean labourers in Russia and a food shortage in his country.

Around 10,000 North Korean labourers are still employed in Russia. All of them will have to leave the country by the end of the year as a 2017 UN sanctions resolution takes effect.

The labourers, who previously numbered as many as 50,000, provided Pyongyang with more than $500m in foreign exchange annually, according to documents seen by Reuters news agency.

“Maybe the numbers will stop decreasing after Kim’s visit,” said Dmitry Zhuravlev, director general of the Institute of Regional Problems in Moscow.

The labourers’ presence is crucial in Russia’s underpopulated provinces that have plenty of fallow land, timber and natural resources but they are “large enough and there is enough room for the Koreans”, added Zhuravlev.

Kim is also looking at the possibility of a food shortage in North Korea this summer. Russia has shown a willingness to provide humanitarian aid.

Last month, it announced it had shipped more than 2,000 tonnes of wheat to the North Korean port of Chongjin.

For Putin, the summit is a chance to push Russia’s agenda of opposing the international influence of the US.

In an interview with China’s official People’s Daily, published on Thursday, Putin lashed out at “countries claiming sole global leadership”.

“They carelessly trample on the norms and principles of international law, resort to blackmail, sanctions and pressure, and try to force their values and dubious ideals on entire countries and populations,” said Putin, who is heading to China after the talks for another summit.

The Vladivostok meeting follows repeated invitations from Putin since Kim embarked on a series of diplomatic overtures last year. 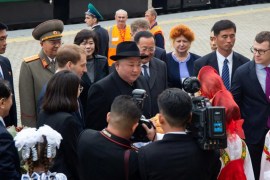 North Korean leader to meet Russian president with discussions on economy, denuclearisation likely to be on the agenda. 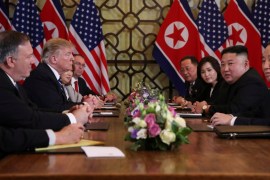 Foreign ministry describes the US secretary of state as ‘reckless’ and says it wants him replaced by another official.