Sudan‘s protest leaders have announced plans to unveil a civilian body to take over from the country’s ruling military council as huge crowds of demonstrators continued their days-long sit-in outside the army headquarters in the country’s capital, Khartoum.

The Sudanese Professionals Association (SPA), which has been spearheading the months-long protests, said in a statement on Thursday that civilian council members would be named at a news conference at 17:00 GMT on Sunday outside the army complex to which foreign diplomats are also invited.

“We are demanding that this civilian council, which will have representatives of the army, replace the military council,” Ahmed al-Rabia, a leader of the umbrella group of unions for doctors, engineers and teachers, told the AFP news agency.

The SPA and other groups behind the protests said the new transitional government should be made up of a presidential council tasked with carrying out the functions of the state, a council of ministers and a transitional civil statutory council.

A blueprint for the transition, proposed by the protest organisers, envisage a presidential council made up of “revolutionary figures” and a defence minister, the only representative from the military. It also said women should make up 40 percent of the legislative council.

Ahmed Adam, a Sudanese lawyer and research associate at SOAS University of London, said the military council was “reluctant to hand over power” and appeared to “lack solid political will to respond to the demands of the protesters on the ground”.

“The military are counting on the divisions among the people on the streets to stay in power,” Adam told Al Jazeera, adding: “The political civilian forces are still discussing the way to respond to this complicated transitional process. The expectations of the people are very high.”

Al Jazeera’s Hiba Morgan, reporting from Khartoum, said there was disagreement between the military and the protest organisers over the length of the transitional period.

“Some political parties want one-year transitional period. The military council wants two-year period while others including the Sudanese Professional Association are saying they want a transitional period of up to four years,” Morgan said.

Activists have called for large crowds to gather after weekly Muslim prayers, as on previous Fridays.

On Thursday, activists mobilised huge crowds outside the army complex through social media to keep up the pressure on the military council, now led by General Abdel Fattah al-Burhan.

“I won’t leave until al-Burhan transfers power to a civilian government,” said Wali Aldeen, who has camped outside the complex since the day al-Bashir was overthrown.

Sara Ali, a 24-year-old doctor, acknowledged that protesters feel some fatigue after nearly four months of demonstrations, including nearly two weeks outside the Defence Ministry, but says most are willing to continue.

“We have brought down the tyrant, Bashir, and it will not be hard for us to force the military council to heed the protesters’ demands or to step aside,” Ali told Reuters news agency.

The anti-government protests began on December 19 in response to the tripling of bread prices, and swiftly turned into nationwide rallies against al-Bashir’s three-decade rule.

After his overthrow, protesters demonstrated against General Ahmed Awad Ibn Auf who took over as the first head of the military council, insisting he was a tool of the old regime.

Ibn Auf stepped down in less than 24 hours and was replaced by al-Burhan, who so far has appeased protesters by lifting a night-time curfew, and sacking some al-Bashir era officials, including two of the former president’s brothers.

But the military council, while willing to accept a civilian government, insists that ultimate authority will remain in its hands until elections are held.

Meanwhile, the United States on Thursday praised orders by Sudan’s new military leader to free political prisoners and end the curfew as it dispatched Makila James, a deputy assistant secretary of state, on a mission to Khartoum this weekend.

The US will “calibrate our policies based on our assessment of events”, State Department spokeswoman Morgan Ortagus said, adding, however, that talks on delisting Sudan as a state sponsor of terrorism remained suspended.

“We are encouraged by the decision to release political prisoners and cancel the curfew in Khartoum,” Ortagus said in a statement. 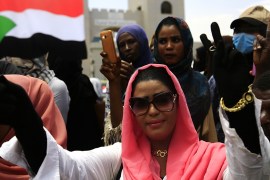 The regional body says the army has 15 days to hand over power to civilian authority or risk suspension. 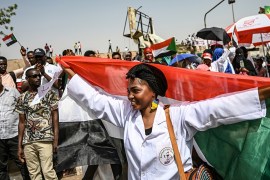