The Kremlin said on Friday that US Special Counsel Robert Mueller‘s long-awaited report did not contain any evidence that the Russian state had meddled in the 2016 US presidential election.

Mueller’s report, released on Thursday with multiple redactions, detailed extensive contacts between Donald Trump‘s 2016 campaign and Russian operatives who, it said, sought to tilt the election in Trump’s favour.

“The Russian government interfered in the 2016 presidential election in sweeping and systematic fashion,” the report said, dedicating hundreds of pages to Russian interference.

“The investigation established that the Russian government perceived it would benefit from a Trump presidency and worked to secure that outcome,” the report said. It added that Trump’s campaign “expected it would benefit electorally from information stolen and released through Russian efforts.”

But the report did not find evidence of a criminal conspiracy between Trump’s election campaign and Russia.

Speaking to reporters on a conference call, Kremlin spokesman Dmitry Peskov said Moscow regretted that the Mueller report was having an effect on its relations with Washington.

“In general, the report still does not include any reasonable evidence at all that Russia allegedly interfered in the US election.

“We, as before, do not accept such allegations,” Peskov said.

“We regret that a document of this quality is having a direct impact on the development of bilateral Russian-US relations that are already not in the best condition,” he added.

Asked on Friday about Russian interference in 2016, US Secretary of State Mike Pompeo said in Washington, DC, that “we will make very clear to them that this is not acceptable behaviour.”

He added that the administration had consistently raised concerns with Russia over interference in the US and other elections.

Trump has tried to cultivate good relations with Russian President Vladimir Putin, and came under heavy criticism in Washington last year for saying after meeting Putin that he accepted his denial of election meddling, over the conclusions of US intelligence agencies. He later walked back on those comments.

Most of the Russian media on Thursday and Friday made a point of rejecting the well-documented findings of Russian interference in the 2016 elections via hacking and a social media campaign.

The state-owned Rossiya television channel said in its report on the Vesti Economy programme late on Thursday that the report is not credible because it has failed to release the content of hacked emails or “specific files”.

“The Mueller probe was an attempt to threaten the current government and influence US foreign policy without offering any specific evidence,” Vesti Economy said.

In July 2018, a US federal grand jury indicted 12 Russian military intelligence officers on charges of hacking Democratic Party computer networks in 2016 and staged releases of documents.

Six former Trump aides, including former campaign chairman Paul Manafort, were charged by Mueller’s office or convicted of crimes during his 22-month-long investigation. The Mueller inquiry spawned a number of other criminal probes by federal prosecutors in New York and elsewhere.

Trump has repeatedly called the Mueller investigation a “hoax” and “witch-hunt”. 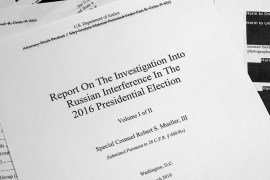 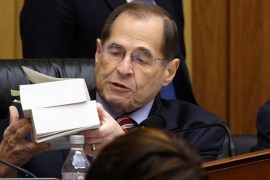 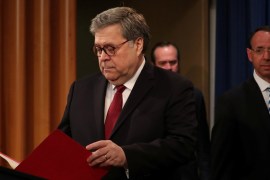