Sudan‘s protest organisers have presented their demands, including the creation of a civilian government, in talks with the country’s new military rulers, the group spearheading the demonstrations said.

A statement by the Alliance for Freedom and Change, an umbrella group leading the protests, said a 10-member delegation submitted its list of demands to the military during a meeting on Saturday.

Thousands remained encamped outside the army headquarters in the capital overnight into Sunday to keep the pressure on the military council that took power after overthrowing long-time President Omar al-Bashir on Thursday.

One of the alliance’s leaders, Omer Eldigair, said in the statement that the demands include restructuring the country’s feared National Intelligence and Security Service (NISS), whose chief Salah Abdallah Gosh has resigned following the removal of al-Bashir.

“We will continue … our sit-in until all our demands are met,” including the formation of a fully civilian government, Eldigair said.

The Freedom and Change alliance insists that civilian representatives should be accepted onto the military council and that a civilian government should be formed to run daily administration.

“We surely want our demands to be met, but both sides will have to be flexible to reach a deal,” said a protester who spent the night at the army complex.

On Saturday, the chief of the military council, General Abdel Fattah Burhan, vowed to dismantle al-Bashir’s establishment and lifted a night-time curfew with immediate effect.

Burhan also pledged that individuals implicated in killing protesters would face justice and that protesters detained under a recent state of emergency would be freed.

Burhan took the oath of office on Friday after his predecessor General Awad Ibn Auf stepped down just a day after the removal of al-Bashir.

Tens of thousands of people have massed outside the army headquarters since April 6, initially to urge the armed forces to back their demand that al-Bashir be removed.

On Thursday, the army toppled the veteran leader, who had swept to power in an Islamist-backed coup in 1989.

But the protesters have vowed to remain in place until the military council demonstrably accepts its demands.

Dozens of people have been killed in protest-related violence since demonstrations erupted against al-Bashir’s rule in December.

Riyadh said it “stands by the Sudanese people” and called on them “to give priority to the national interest” of their country. The UAE called on the Sudanese “to work for protecting legitimacy and ensuring a peaceful transfer of power”.

In separate statements issued late on Saturday, Saudi Arabia and the UAE specifically expressed support for Sudan’s transitional council formed by the military. The UAE said it welcomed the swearing-in of Burhan on Friday as head of that council. 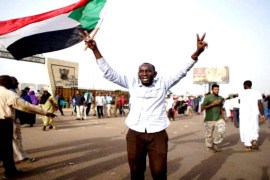 A military council is to rule the country after former President Omar al-Bashir’s removal and arrest. 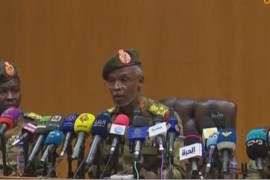 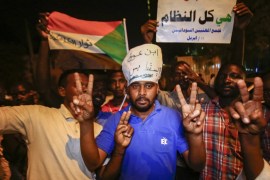