India’s ruling Bharatiya Janata Party (BJP) has made 75 promises, which include the contentious decision to scrap a decades-old law providing special rights to the residents of disputed Kashmir region, according to the party’s election manifesto.

Prime Minister Narendra Modi’s BJP has consistently advocated ending Kashmir’s special constitutional status, which prevents non-residents from buying property in Indian-administered Kashmir, arguing that such laws have hindered its integration with the rest of the country.

“We believe that Article 35A is an obstacle in the development of the state,” the party’s manifesto said.

Political leaders in Muslim-majority Kashmir, where India is fighting an armed rebellion against its rule, have warned that repealing the law would lead to widespread unrest.

Modi has made his strong stance on national security a key part of the BJP’s election campaign, following a recent flare-up in tensions with arch foe Pakistan, which also lays claims to Kashmir.

“Nationalism is our inspiration,” Prime Minister Modi said at the release of the BJP’s election manifesto at the party headquarters in New Delhi.

Amit Shah, the head of the Hindu nationalist party, along with other top leaders released the BJP manifesto for the upcoming elections that begin on Thursday.

The BJP also promised to reserve 33 percent of seats in the Indian parliament and state assemblies for women, if it is voted back to power.

“Women’s welfare and development will be accorded a high priority at all levels within the government, and the BJP is committed to 33 percent reservation in parliament and state assemblies through a constitutional amendment,” the manifesto said.

Al Jazeera’s Faiz Jamil, reporting from New Delhi, said these manifestos are the intent – not necessarily what the governments are going to do.

“Among the more controversial promises is to create a uniform civil code – currently under the constitution, different religions have different civil code rights, particularly for marriage and inheritance,” he said.

“They also want to pass the citizenship bill – a measure that would allow immigrants from neighbouring countries who are not Muslim to get Indian citizenship.”

The BJP promised a capital investment of 100 trillion Indian rupees ($1.44 trillion) on infrastructure by 2024, to help create jobs for the millions of youth entering the workforce every year.

The party pledged to simplify the goods and services tax (GST), which disrupted businesses and hurt economic growth when it was introduced by Modi’s government in 2017.

The party said it is committed to building a temple for Hindu god Ram in Ayodhya in place of medieval era Babri mosque, which was demolished by Hindu mobs in 1992.

Surveys suggest the BJP is the frontrunner going into the election, although some have said it could lose the clear majority it won five years ago.

The national elections will see close to 900 million voters cast their ballots in nearly a million polling booths – the world’s biggest ever democratic exercise.

Voters will elect 543 of 545 MPs to India’s lower house of parliament, the Lok Sabha. 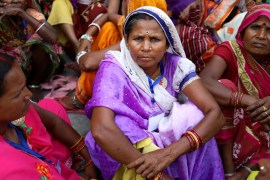 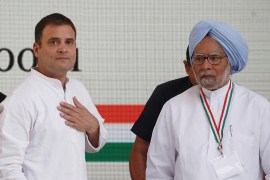 Al Jazeera spoke to experts to understand the main promises made by Indian opposition party ahead of national elections. 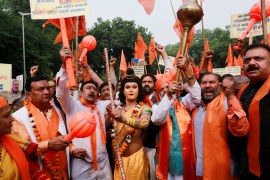 Why India’s BJP wants to rekindle the Babri mosque dispute

The BJP fears loss of popularity so much that it feels the need to ignite another communal conflict to stay in power. 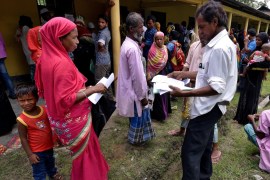