The head of Libya’s internationally recognised government has accused renegade General Khalifa Haftar of “betraying” him after the latter launched a military offensive aimed at capturing the capital, Tripoli, in a showdown that has sparked fears of a renewed war.

“We have extended our hands towards peace but after the aggression that has taken place on the part of forces belonging to Haftar and his declaration of war against our cities and our capital … he will find nothing but strength and firmness,” al-Sarraj said. He also warned of “a war without winners”.

Al-Sarraj and Haftar held talks in Abu Dhabi in late February, their first confirmed meeting since November 2018, during which they agreed that national elections were necessary, according to the UN.

“They also agreed on ways to maintain stability in the country and unify its institutions,” the UN Libya mission said in a Twitter post after the Abu Dhabi meeting.

The GNA controls Tripoli, situated in northwestern Libya, while the LNA is allied to a parallel administration based in the east of the oil-rich country, which splintered into a patchwork of competing power bases following the overthrow of former leader Muammar Gaddafi in 2011.

Clashes between the rival forces escalated on Saturday, two days after Haftar ordered his eastern forces to storm their way into the capital, with fighting erupting in several areas on the southern outskirts of Tripoli.

Al Jazeera’s Mahmoud Abdelwahed, reporting from the capital, said the city’s disused international airport and a clutch of other nearby neighbourhoods on Saturday witnessed “military deployments and sporadic fighting”.

GNA officials told Al Jazeera they had taken “full control” of the airport just hours after the LNA said in a statement they were carrying out an operation to secure the site, which sits some 30km south of Tripoli.

The facility has been abandoned since 2014, after suffering extensive damage during heavy fighting between rival armed groups.

Its fall would be a largely symbolic development, even though the LNA said they planned to use the airport as a launching point for missions aimed at seizing key sites within the capital.

Pro-GNA forces have also amassed in the outskirts of the city in a bid to push back the LNA offensive, including truckloads of fighters from different powerful militias arriving from Misrata.

In response to Haftar’s drive, the GNA has also authorised air attacks against “any military activities by [LNA] forces trying to enter the capital”, Abdelwahed said.

Haftar’s spokesman, Ahmed al-Mesmari, said the LNA was targeted by four air raids on Saturday, including one in the al-Aziziya region, about 50km south of Tripoli.

“Any fighter jet flying over Tripoli will not be allowed and will be targeted, the airbase it came from will also be targeted,” al-Mesmari said. He added that no LNA troops were wounded in the air raids.

Amid growing alarm, human rights groups and a chorus of international powers called for a cessation of all hostilities, warning that civilians could suffer possible abuses if the fighting escalated.

Such a flare-up also threatens to torpedo a UN-led national reconciliation conference scheduled for next weekend, aiming to hammer out a plan for the elections.

The UN envoy to Libya, Ghassan Salame, who met al-Sarraj on Saturday, said he was determined that the conference scheduled for April 14-16 would be held on time.

In his televised address, al-Sarraj said that the reconciliation meeting offered the only way out of the country’s political crisis, Abdelwahed said.

Activists accuse Haftar’s forces of committing human rights violations, with Human Rights Watch saying in a statement on Saturday that LNA fighters “have a well-documented record of indiscriminate attacks on civilians, summary executions of captured fighters, and arbitrary detention”.

But the right group’s statement also noted that militias affiliated with the GNA and based in western Libya “also have a record of abuses against civilians”.

The warning came after the G7 – a bloc comprised of the United States, Canada, France, Germany, Italy, Japan and the United Kingdom – and the UN Security Council called on Friday in separate statements for all parties to the conflict in Libya to end military activities. 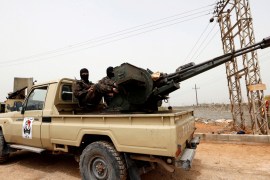 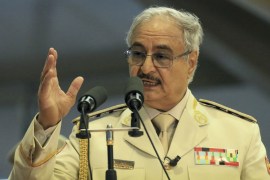 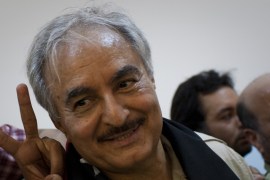