Islamabad, Pakistan – Pakistan’s military has called on India to share “the truth” about an aerial dogfight at the height of tensions between the nuclear-armed South Asian neighbours in February after a US magazine published a report refuting Indian claims that it had shot down a Pakistani F-16 fighter jet.

“This is what Pakistan has been saying all along, the truth,” said Pakistani military spokesperson Major-General Asif Ghafoor on Friday. “It’s time for India to come up with [the] truth about losses on their side including targeting of [a] second jet by Pakistan.”

Ghafoor’s statements came hours after the publication of a report in US-based Foreign Policy magazine that quoted two unnamed US defence officials as verifying that, following a count of Pakistan’s F-16 fighter jet fleet, there were no aircraft missing.

India claims that one of its MiG-21 fighter jets shot down a Pakistani F-16 before itself being shot down on February 27. The pilot of that jet, Wing Commander Abhinandan Varthaman, was captured by Pakistan and returned to Indian custody two days later.

Pakistan, however, has consistently denied that claim, saying none of its aircraft were shot down during the weeks of tensions between the two countries. It also claims to have shot a second Indian air force jet during the engagement, a claim India has denied.

The F-16 aircraft are manufactured by US weapons manufacturer Lockheed Martin, and have formed the backbone of Pakistan’s air force for decades.

A large number of the F-16s were purchased by Pakistan under a US security aid programme, which imposes certain limits on how the aircraft can be used.

Those restrictions do not apply to Pakistan’s entire fleet of F-16s, and Islamabad says all of its aircraft – whether purchased outright or through US aid – can be used in legitimate cases of self-defence, such as the engagement on February 27.

“Pakistan retains the right to use anything and everything in its legitimate self defence,” said a Pakistani military statement on the aerial engagement released on Monday.

At the time, Indian officials shared shrapnel from an AIM-20 advanced medium range air-to-air missile used during the engagement – one that could not be fired from Pakistan’s other fighter aircraft – as proof that F-16s were used in the dogfight.

The Foreign Policy report comes at a sensitive time for the Indian government led by Prime Minister Narendra Modi, who has touted the recent escalation in military hostilities between the two countries as a victory for his national security stance.

The recent India-Pakistan face-off is expected to boost Modi’s chances of re-election in the staggered general elections beginning on April 11.

Tensions between the South Asian countries reached a fever pitch following a suicide attack on Indian security forces in the disputed territory of Kashmir that killed at least 40 Indian personnel in the town of Pulwama in mid-February.

India blamed the Pakistan-based Jaish-e-Muhammad (JeM) armed group for the attack, with an Indian general alleging that Pakistani intelligence services had “controlled” the attack. Pakistan denied the claim.

On February 26, India launched air attacks on Pakistani territory near the northern town of Jaba, claiming it had destroyed a JeM “training camp” housing “hundreds” of fighters.

An Al Jazeera visit to the site of the air raids a day later found evidence of the attacks having hit a forested hillside and causing light damage to a farmer’s home. While a JeM school was found near the site, there was no evidence of mass casualties, as India had claimed.

Pakistan then claimed to have carried out a series of retaliatory air raids at sites adjacent to military targets in six locations of Indian-administered Kashmir, saying the attacks were intended to show resolve and not to cause any casualties or infrastructure damage.

It was during the aftermath of the Pakistani air raids on February 27 that the aerial dogfight that saw Wing Commander Varthaman shot down, and the accompanying Indian claim of shooting down an F-16, took place.

At the time, US officials told Al Jazeera the Pakistani military had invited US inspectors to visit Pakistani airbases to verify the number of F-16s in the fleet. 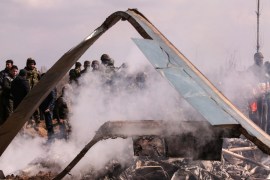 Is war coming to South Asia?

The confrontation between India and Pakistan could escalate further but war is not in anyone’s interest.