Bangkok, Thailand  – Preliminary results from Thailand’s Election Commission show a military-backed party in the lead, in the country’s first elections since a military coup in 2014.

With about 90 percent of ballots in Sunday’s long-delayed polls counted, the Palang Pracharat party had seven million votes. Pheu Thai, the party linked to the former Prime Minister and exiled tycoon Thaksin Shinawatra, had 6.6 million.

Future Forward, a newly founded party that campaigned on a promise of change and military reform, was third, with nearly 4.8 million votes.

The commission said it would announce the final results on Monday at 2pm (07:00 GMT).

The vote is taking place under a new constitution that gives the military considerable influence over the country’s civilian politics and makes it difficult for any party to win a majority in the 500-seat lower house. The upper house is appointed by the military.

Prayuth Chan-ocha, the retired army general who led the coup against the country’s last elected government five years ago, hopes the election will return him to power as a civilian prime minister.

The prime minister will be the person who secures a majority across both houses, and the 250-seat Senate is seen as giving Prayuth an advantage.

“This constitution was written to support a crazy party,” Boon Srichok, 77, told Al Jazeera at Pheu Thai’s headquarters in Bangkok. “Palang Pracharat already had 250 by law and that’s not fair. It’s cheating.”

Turnout stood at 65.96 percent, below expectations. In early voting last week, it was 87 percent.

About 52 million voters were registered to vote, some seven million of them for the first time.

“Assuming that the elections were fair, which might be debatable, this was the final piece of a five-year plan come to fruition; a coup, an undemocratic constitution and an election that came out in favour of the military,” David Streckfuss, an independent historian based in Khon Kaen in the northeast, told Al Jazeera.

“They will claim that now they are legitimate.”

Commenting on Future Forward’s strong performance, he added: “The one good thing about this election and something that might bode well for the future is that the Future Forward party achieved a surprisingly good result given the youth of the party.”

‘Beginning to see the future’

Earlier on Sunday, at a polling station in the Jula hospital of Chulalongkorn University, election officials counted down the minutes to the closing of the polls and a few stragglers rushed to cast their ballots.

Nurse Pornsiri Supkong arrived in a puff with five minutes to spare. The 23-year-old said she had decided who to vote for after analysing party policies but had also concluded that after so many years of division it was time for Thailand to try something new. “I looked back at the conflict and I thought I want to break from that,” whispering that she had decided to back Future Forward, which was founded last year by car parts billionaire Thanathorn Juangroongruangkit.

The vote count in the polling station, one of the 6,000 in Bangkok, showed others seemed to share her view with Future Forward performing strongly, and Prayuth’s Palang Pracharat in second place.

A few members of the public were on hand to watch the count.

“We are beginning to see the future,” said two students as they walked away.

Campaigning has been spirited and Pheu Thai that has its power base in the rural northeast is expected to win the most seats.

Other major parties include the Democrats, Thailand’s oldest political party, under Abhisit Vejjajiva. The leader announced his resignation later on Sunday after partial results showed the party coming fifth, with 2.98 million votes.

In the sports hall of the Mater Dei School in central Bangkok, a steady stream of voters came to cast their ballot after the doors opened.

Phatcharin Ayasahond, 55, agreed the election was important, but her main concern was to preserve peace and stability.

The IT worker said she had been caught up in the violence on the streets of Bangkok in 2010 and did not want that kind of conflict to return.

“This election is very important,” she said after casting her vote. “This time it’s for us to decide who will be prime minister.”

She declined to reveal who she voted for.

Thais are choosing their representatives through a complicated system that includes both direct votes and a party list, and while the official results will not be announced until after the coronation of King Vajiralongkorn in May, the Election Commission is expected to announce preliminary results hours after the polls close.

The king himself released an announcement on the eve of the election that was broadcast across national television to say that Thais should support “good people” to run the country.

Thailand has been consumed by divisions between supporters and opponents of Thaksin since he was elected prime minister in 2001 promising to help ordinary people who had long felt ignored by the traditional elites in Bangkok.

Thaksin was overthrown in a coup in 2006 after mass street protests by the so-called “yellow shirts” and lives in exile after being found guilty of corruption. He says the charges were politically motivated.

The cycle of Thaksin-backed election win, instability and coup continued until Prayuth seized control of the country in 2014, banning political activity and cracking down on freedom of expression.

Despite the ban being lifted to allow election campaigning, parties and candidates continue to operate in a restrictive environment.

Thai Raksa Chart, another Thaksin-linked party, was banned and dissolved in February after nominating Princess Ubolratana, the king’s elder sister, as its candidate for prime minister.

Thanathorn faces court on Tuesday for criticising the military.

Parties need to secure 376 seats for a majority so it is possible for Palang Pracharat to form a government with only 126 seats in the lower house, assuming they have the support of the 250-seat upper house which is appointed by the military.

“This is a step along the way,” cautioned Thitinan Pongsudhirak of Chulalongkorn University in Bangkok. “There’s a long road ahead and we have to be mindful and sober. It’s not a genuine democracy. It’s a democratic transition under military custody.” 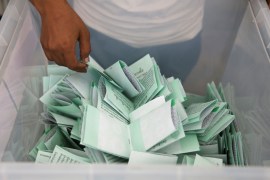 Five years after a military coup, Thailand holds an election, with millions of people voting for the first time. 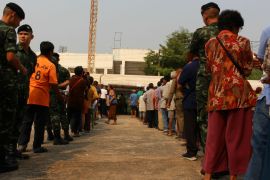 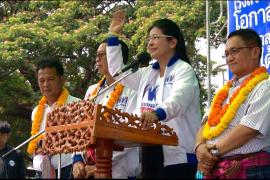 The military-backed Palang Pracharat is hoping to defeat the Pheu Thai party, which has won every election since 2001. 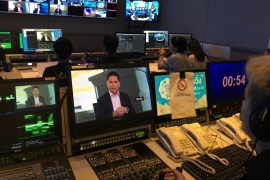 ‘Gagged’ Thai media fights for a voice as elections loom

Restrictive laws have hobbled Thai media since General Prayuth Chan-ocha took control of the government in 2014.