Austria’s Chancellor Sebastian Kurz says there is a link between a far-right movement in his country and the suspect in an attack on two mosques in the New Zealand city of Christchurch in which 50 Muslims were shot dead.

The suspect, a 28-year-old white supremacist identified as Australian-born Brenton Tarrant, donated 1,500 euros ($1,700) to the anti-immigration Identitarian Movement in Austria (IBOe) in early 2018, according to prosecutors.

On Monday, the home of Identitarian Movement spokesman Martin Sellner in Austria’s capital, Vienna, was searched as part of an investigation into possible links to the suspect.

“It has been confirmed that there is a financial link between the man who perpetrated the attack in New Zealand and the Identitarian Movement in Austria,” Kurz told reporters following a cabinet meeting on Wednesday.

He also said the link would be investigated thoroughly and that he had talked to interior and justice ministers about dissolving the far-right Identitarian Movement.

“Both ministries will mobilise all their means against this movement,” he added.

In a video published on YouTube, Sellner denied having any link with the suspect beyond receiving the donation and having sent back a routine thank-you email.

“I’m not a member of a terrorist organisation. I have nothing to do with this man, other than that I passively received a donation from him,” Sellner said.

Kurz stressed that any kind of violent racism would not be tolerated in Austria, adding that perpetrators would be dealt with according to the law.

There is “no tolerance for dangerous ideologies, no matter what political corner they belong to,” the conservative leader told reporters after a cabinet meeting in Vienna.

Since late 2017, Austria has been governed by a coalition of Kurz’s centre-right People’s Party (OeVP) and the far-right, anti-immigration Freedom Party (FPOe).

What is the Identitarian Movement?

The Identitarian Movement is known for its anti-migrant and anti-Muslim stance.

It has branches in several Western countries.

It campaigns against immigration and warns against what it calls the “Great Replacement” of local populations by non-Western and Muslim migrants.

The Christchurch attacker, who on March 15 entered the Al Noor and Linwood mosques in the New Zealand city and shot worshippers in cold blood, including four children, also titled his manifesto “The Great Replacement.”

In July last year, Sellner and 16 other IBOe members were found not guilty of charges of criminal association and hate speech.

Two of the accused were, however, found guilty on lesser charges over anti-immigration stunts by the group’s members, including storming a university lecture hall during a refugee policy talk in 2016.

In March last year, British authorities denied Sellner entry to the UK, saying his presence would not have been “conducive to the public good”. 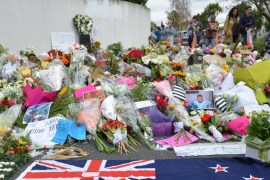 Why did New Zealand intelligence fail to catch attack suspect?

Massacre of 50 Muslims prompts conversations about alt-right, spies and Islamophobia in New Zealand and elsewhere. 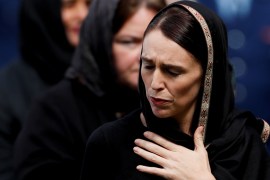 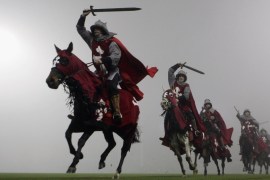