Hojai, India – After battling for life for five days at a hospital in Guwahati, the capital of the northeastern Indian state of Assam, Kulsuma Begum succumbed to her injuries on March 11.

Her mother-in-law alleged police and paramilitary forces barged into her house to physically remove Kulsuma – who had given birth to a baby boy just two hours ago – during an eviction drive at Sarkebasti village in central Assam’s Hojai district, about 150km east of Guwahati.

Authorities in the Karbi Anglong Autonomous Council (KAAC) forcibly evicted more than 600 Muslim families from their land in Hojai, saying the families, including Kulsuma’s, had encroached upon government land.

“Seven to eight policemen entered the house and started ransacking it. I could take some stuff out. When I came back I saw Kulsuma was lying on the floor and couldn’t move,” Ramisa Khatun told Al Jazeera.

“I took up the baby as I feared they might kill him,” said Ramisa, 50. As Kulsuma was being ushered out of the house she collapsed, said Ramisa.

Seven to eight policemen entered the house and started ransacking it

The 22-year-old was rushed to Guwahati after a local hospital in Hojai referred her to Gauhati Medical College and Hospital, where a doctor said she had “suffered shock”.

In one corner of the Guwahati hospital corridor, the newborn baby was sleeping next to Ramisa on a visibly dirty blanket. The baby has now been handed over to the family.

“A case has been registered and the investigation is going on,” Hojai Deputy Commissioner (DC) Tanmoy Borgohain told Al Jazeera.

Tuliram Ronghang, chief executive member of the KAAC and leader of the ruling Bharatiya Janata Party (BJP) in Assam, alleged that undocumented immigrants from Bangladesh had encroached upon the land, which belonged to Karbi Anglong.

However, the evictees refuted Ronghang’s allegations, saying they are genuine Indian citizens. Some activists questioned the legality of the entire operation, saying Sarkebasti village fell under Hojai district and not under KAAC jurisdiction.

A letter by a top Hojai official to Assam’s chief secretary corroborated their claims. The letter written on February 28 rejected the allegation that people had encroached upon forestland and warned against any eviction drive.

Despite concerns of human rights violations and legal complications, the Karbi Anglong administration still went ahead with its operation to uproot hundreds of families weeks before the general elections scheduled in April and May.

A court in Guwahati finally put a stop on the evictions asking the administrations in Hojai and Karbi Anglong to settle the border dispute.

Under the BJP government in Assam, which came to power in 2016 on an anti-immigrant plank, eviction drives have escalated.

Less than six months after coming to power in Assam, the BJP government – the first in the northeastern states – launched eviction campaign near the famous Kaziranga National Park against what it called “illegal encroachment”.

A case has been registered and the investigation is going on

In February 2017, the government informed the Assam assembly that about 3,481 families were evicted from 13 districts. While most of them were Muslims, they also included other marginalised social groups such as the tribal people.

However, government records reveal hundreds of people were evicted from the lands they officially owned.

Indrajit Bezbaruah, an associate professor at Assam’s Lumding College, said those evicted were either internally displaced persons (IDPs) from flood-affected areas, IDPs from ethnic conflict-ridden Bodoland districts, or the local landless peasants belonging to the indigenous Kachari Muslim community settled in the area since the 1970s.

Peasant organisations in the area have been demanding the government to provide them with land ownership for more than two decades.

However, neither the central nor the state government has laid down any policy to rehabilitate Assam’s IDPs. With little institutional support, many of them have settled on government land over the decades.

Suprakash Talukdar, a leader of the Communist Party of India-Marxist (CPM), alleged that Assam government has not conducted any land settlement survey since 1965, which has denied land to the landless and kept them vulnerable to forced evictions.

Bhabesh Kalita, Minister of State for Revenue and Disaster Management in Assam, however, said his government was working to rehabilitate those displaced by erosion.

“We have a policy for rehabilitation for erosion affected families only for those people who are displaced from patta [documented] land and we are rehabilitating them,” Kalita said.

Muslim IDPs in Assam carry an additional risk of being stripped of their citizenship rights, according to Guwahati-based activist Hafiz Ahmed.

Eviction policy doesn't discriminate against people based on caste, creed or religion

Ahmed alleged the government has built an anti-Muslim sentiment to marginalise the community.

“BJP came to power in the state on the premise of hatred against the Muslims. They want to keep the momentum of hatred on till the general election,” he said, referring to the national elections.

Kalita, the Assam minister, however, denied the government was targeting a particular group.

“Eviction policy doesn’t discriminate against people based on caste, creed or religion,” he told Al Jazeera.

Syed Burhanur Rahman, a lawyer at Gauhati High Court, said the eviction could result in the affected Muslims being declared stateless.

“Despite the warning from the highest authority of the district administration that it will affect the NRC process, how the government could go ahead with the eviction drive,” asked Rahman.

Meanwhile, Mafijul Islam, Kulsuma’s brother-in-law who works as a construction worker in Guwahati, told Al Jazeera that they were asked to attend the NRC hearing in Nagaon district, about 50km from Hojai, three days after their house was demolished.

As Kulsuma fought for her life at the Guwahati hospital, her family members travelled over 120km to Nagaon to meet the NRC official, who refused to meet them since they had reached the venue after the 4pm deadline.

Back in Hojai, hundreds of families have been rendered homeless.

Hojai Deputy Commissioner Borgohain said on “humanitarian grounds we have sent a medical team and trying to provide drinking water”.

Activists have raised concerns at the timings of the evictions as elections are barely a couple of weeks away.

But Borgohain assured his administration has taken steps to address the concerns regarding the conduct of the elections (among the displaced people).

In Guwahati, Talukdar’s CPM party and other civil society groups organised a protest march to seek justice for Kulsuma.

Assam’s Muslims are more vulnerable as certain political forces treat them as “second class citizens because of their identity”, Talukdar said. 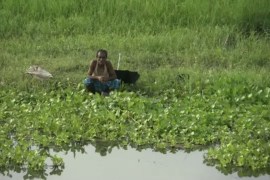 Al Jazeera travels to Assam to speak to those facing an uncertain future and challenge the NRC on its citizenship list.