Tropical cyclone Idai, the biggest to hit Mozambique in over a decade, made landfall on Thursday evening just north of the port city of Beira. The strongest winds around the eye were about 160km an hour, blowing from the south across the city.

The winds caused structural damage and power outage during the afternoon, well before landfall which happened after dark.

Flights were cancelled before the landfall, but as is usually the case with cyclones, the wind was only a temporary inconvenience – water is the most dangerous and damaging factor.

Beira is a city of half a million residents built around a major port in the estuary of the Pungwe River. The estuary opens to the south and is a natural funnel for winds, such as those circulating around Idai.

Meanwhile, over the Mozambique Channel, Idai had built waves up to seven metres high. As a cyclone moves over water, it drives a storm surge in the face of it.

In this case, the surge was about two metres. So, before Idai’s approach, the surface of the ocean rose two metres with waves rising regularly seven metres above that – at worst, nine metres.

The weather station at Beira airport is eight metres above sea level. Since the port and the city are lower than that, inundation is a significant risk.

The tide can rise to a surprising seven metres as is the case forecast for Friday. Thursday evening’s tide was five metres and the storm surge from Idai arrived with it. The waves were driven on top.

Communications have been lost from Beira since Thursday evening, so any overnight damage is as yet unknown.

When cyclone Eline, which had a similar strength to Idai, came onshore in late February 2000. The stormy weather sank five ships in Beira harbour and stopped the supply of power and fresh water to the city.

In its early stages, Idai brought widespread flooding to southern Malawi and the adjacent Mozambique province of Zambezia.

At least 80,000 people have been displaced and dozens of people killed.

Idai has the potential to drop up to 500mm of rain on its way through central Mozambique. The rate of rainfall will reduce as the storm moves towards the Zimbabwe border but flooding is inevitable. 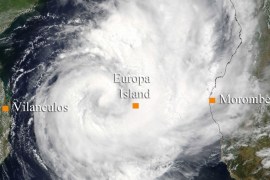