Islamabad, Pakistan – The government of Pakistan has passed a regulation authorising the seizure of assets of armed groups that have been sanctioned by the United Nations and listed under Pakistani domestic anti-terrorism laws.

“The objective of the UNSC (Freezing and Seizure) Order 2019 is to streamline the procedure for implementation of Security Council Sanctions against designated individuals and entities,” said Pakistan’s foreign ministry in a statement released on Monday.

The move follows an attack on a security forces convoy in Pulawama last month, which killed at least 42 people and sparked a crisis that saw Indian and Pakistani jets bomb each others territory, with at least one Indian aircraft shot down and its pilot captured.

The pilot was later returned to India on Friday, with Pakistan hoping the gesture would defuse the crisis to a degree.

The Jaish-e-Muhammad (JeM) group claimed responsibility for the attack and a top Indian general accused Pakistani intelligence services of “controlling” it.

JeM, a Pakistan-based armed group that targets Indian security forces in the disputed territory of Kashmir and elsewhere, was banned as a “terrorist” organisation under Pakistani law in 2002.

The UN said JeM has coordinated with the Afghan Taliban to target members of the US-led NATO military coalition in neighbouring Afghanistan, as well as with al-Qaeda.

Its chief, Masood Azhar, is not subject to UN sanctions, but appears on a Pakistani government list of “proscribed individuals”.

Other armed groups subject to the new measure include Lashkar-e-Taiba and its charitable arms, Jamaat-ud-Dawa and Filah-e-Insaniyat Foundation (FIF).

The passing of the regulation by Pakistan comes as the country has come under increasing pressure from the Financial Action Task Force (FATF), a 38-member intergovernmental body that monitors and combats the financing of armed groups and money laundering.

Among other implications, FATF blacklisting would put barriers between Pakistan’s financial system and the international banking system.

Monday’s statement by Pakistan’s foreign ministry explicitly acknowledged that the new regulation had been “been formulated in line with UNSC [United Nations Security Council] and FATF standards”.

The new regulation formalises the methodology for seizing assets, including funds, moveable assets, bank deposits and property. It allows for those subject to the assets freeze to apply for exemptions based on “basic living” needs, in line with UN regulations.

UN sanctions require designated individuals and groups to be subject to an assets freeze, international travel ban and arms embargo.

Pakistan has passed regulations similar to these measures in the past, with listed individuals often finding relief through the court system, challenging the freeze on the grounds of violating their fundamental rights.

Analysts say that for this measure to have any real impact, it will have to be passed by parliament, effectively amending the constitution to allow the seizing of assets belonging to Pakistani citizens based on international sanctions, regardless of any convictions in Pakistani courts.

“They pass these regulations whenever they want to action,” said Amir Rana, director at the Islamabad-based Pakistan Institute of Peace Studies (PIPS).

“They will have the same status as before, unless we will not have the proper legislation on these issues. They will get relief from the court.” 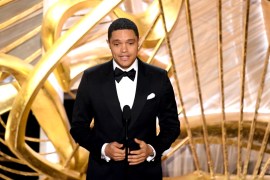 Daily Show host apologises after calling potential India-Pakistan war the ‘most entertaining’ and ‘longest of all time’.