A crowd of cheering supporters greeted Guaido and his wife as they stepped into the Maiquetia airport’s arrivals hall, and then sped to an opposition rally in eastern Caracas where thousands had gathered to welcome him.

“Hope has been born and it will not die – things are going well,” said Guaido, the self-declared interim president who is recognised by most Western nations as Venezuela‘s legitimate head of state.

In violation of a Supreme Court order, Guaido secretly left Venezuela for Colombia last month to coordinate efforts to bring humanitarian aid into Venezuela on February 23 to alleviate widespread shortages of food and medicine.

But Venezuelan troops, who remain loyal to Maduro, blocked convoys of aid trucks sent from Colombia and Brazil, leading to clashes that killed at least six people along the Brazilian border, rights groups say.

From Colombia, Guaido travelled to Argentina, Brazil, Ecuador and Paraguay to shore up Latin American support for a transition government that according to him will precede free and fair elections.

On Sunday, he departed by plane from the Ecuadorean coastal town of Salinas but had not appeared publicly since. Venezuelan media outlets reported that he flew from Panama City to Caracas.

“His return can be understood as a [direct] challenge to the institutions controlled by Maduro,” Carlos Eduardo Pina, a Venezuelan political scientist, told Al Jazeera.

“The most likely scenario is that the Chavismo will retreat tactically, allow the entrance of Guaido, but argue that all this is part of a mediatic [media] show, and that at the end of the day the president in office is still Nicolas Maduro,” he said.

Pina added that because Guaido has the backing of the United States and European Union, Maduro’s options were limited.

“Under other circumstances Guaido would have been immediately arrested,” he said.

‘He can’t just come and go’

Maduro, who denies there is a humanitarian crisis in Venezuela, has said Guaido’s arrest depends on the justice system.

“He can’t just come and go. He will have to face justice, and justice prohibited him from leaving the country,” he told ABC News last week.

“I invite the Venezuelan families to enjoy the festivities and the natural beauty that our beloved Venezuela offers us,” he wrote on Twitter.

A government supporter, Emigio Pereira, told Al Jazeera that he believes the “government acted well by letting Guaido in without problems”.

“They (the opposition) are waiting for a military intervention and the government is not going to fall into the trap. Maduro is giving us peace. That’s all we want,” he added.

Venezuelan Vice President Delcy Rodriguez said that the “appropriate measures” will be taken to address this situation.

“His behaviour, his activities, these will be carefully analysed by [our] institutions, and appropriate measures will be taken,” Rodriguez said on Monday in an interview with Russia 24.

“We are here to tell Nicolas Maduro not to even think about touching our president Juan Guaido,” Marcos Gonzalez, an opposition supporter told Al Jazeera.

The US has also warned Maduro about the consequences of arresting Guaido.

Venezuelan Interim President Juan Guaido has announced his planned return to Venezuela. Any threats or acts against his safe return will be met with a strong and significant response from the United States and the international community.

The government has jailed dozens of opposition leaders and activists for seeking to overthrow Maduro through violent street demonstrations in 2014 and 2017, including Guaido’s mentor, Leopoldo Lopez, who remains under house arrest.

Turning away from previous hopes of a swift end to Maduro’s government, Guaido said on Sunday it would be a “long and difficult process.”

With additional reporting by Erika Fiorucci in Caracas. 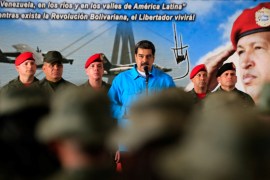 The Venezuelan armed forces are not ready to rebel against Maduro and here is why. 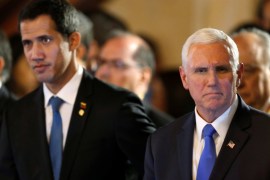 US ramps up pressure on Maduro with fresh sanctions