“We will give a befitting reply,” Modi said in a speech on Friday, soon after he called his security advisers to consider a response to the worst attack on Indian security forces in decades.

“Those who committed this heinous act will pay a heavy price. Those who supported it will definitely be punished,” he was quoted as saying by the Indian Express newspaper.

“If our neighbour thinks it can destabilise India, then it is making a big mistake.”

Thursday’s attack was claimed by the Pakistan-based Jaish-e-Mohammad (JeM) soon after a Kashmiri rebel rammed an explosive-laden car into a bus carrying personnel of the Central Reserve Police Force (CRPF).

The bombing has ratcheted up the tension between the two South Asian neighbours, which rule parts of Muslim-majority Kashmir while claiming the entire territory as their own.

Pakistan has denied any involvement and warned India against linking it to the attack.

However, Arun Jaitley, India’s finance minister, said there was “incontrovertible evidence” that Islamabad had a “direct hand in this gruesome attack”.

He told reporters India would ensure “the complete isolation of Pakistan from the international community”. The first step, he said, would include India removing most-favoured-nation (MFN) privileges given to Pakistan under the World Trade Organization (WTO) rules.

Gowhar Ahmad, 27, a Kashmiri who lives in Jammu with his family, told Al Jazeera  cars were burned by protesting mobs who expressed their anger at the involvement of a Kashmiri in the attack.

“We fear to go out and are indoors. Forces have been called in all the areas, their anger is towards Kashmiri Muslims after the attack,” he said.

The Indian Home Minister Rajnath Singh arrived in the region on Friday morning to take stock of the situation.

Hundreds of security forces guarded the streets as residents remained indoors “fearing a backlash from the forces”.

Habibullah Bhat, 40, a resident of Pulwama, said the attack was in response to abuses carried out by security forces in the region. “We have seen so much of bloodshed since past few years that we are tired of it now,” he said.

The political leaders in the disputed territory cautioned authorities “against any attack on the minorities”.

“Kashmiris/Muslims in Jammu did not attack our CRPF Jawans yesterday, terrorists did. This violence is a convenient tool by some to shift the blame. Let us unite against terror let’s not allow terror to divide us,” the former chief minister of the region, Omar Abdullah, wrote on Twitter.

Islamabad has rejected India’s suggestion it was linked to the attack, which it called a matter of “grave concern”.

“We strongly reject any insinuation by elements in the Indian government and media circles that seek to link the attack to the State of Pakistan without investigations,” Pakistan’s Ministry of Foreign Affairs said in a statement.

It said it gives only moral and diplomatic support to the Kashmiri people in their struggle for self-determination.

Sreeram Chaulia, professor of international relations at the Jindal School of International Affairs in India, said the Kashmir bombing strains ties that “were already at rock-bottom” between New Delhi and Islamabad.

India will now look at a “whole gamut of retaliatory measures, including military options, diplomatic isolation” and even cross-border raids, Chaulia told Al Jazeera from Sonipat, a city near the Indian capital.

But revoking trade privileges will not “hurt much”, he said, as “Pakistan exports less than $1bn worth of products to India because of strained relations”.

Chaulia, who backed India’s claim that Pakistan harbours armed groups, added: “We need to lobby China and the Organisation of Islamic Cooperation, we need to turn to Western countries, to try and create a regional consensus that this is not acceptable and change Pakistan’s behaviour.”

Mona Alam, an Islamabad-based defence and security analyst, denied Pakistani involvement in the attack, saying it was a response to India’s alleged human rights abuses in Kashmir.

“India needs to reflect on its policies and the war crimes it has been undertaking in Jammu and Kashmir … where the Indian security forces have full impunity to suppress the Kashmiri people’s right to self-determination,” she told Al Jazeera.

The separatist armed struggle in Kashmir has waxed and waned since the late 1980s, but began to pick up in the last five years as a new generation of rebels took up arms against New Delhi’s rule.

The anti-India unrest grew significantly after a popular rebel leader Burhan Wani was killed by security forces in 2016.

‘This could get bad’

Moeed Yusuf from the US Institute of Peace said the “current situation has all the making of an India-Pakistan crisis”.

The next 24-48 hours will be crucial, he told the AFP news agency, warning, “This could get bad.”

He added: “The hope was that India and Pakistan will get back to talking after the Indian elections later this year. I think the hawks on both sides are going to make it very difficult for that to happen now.”

Meanwhile, the Indian government has urged the United Nations to list JeM chief Masood Azhar as a designated “terrorist”.

In a statement hours after the attack, the Indian foreign ministry accused Pakistani government of allowing Azhar “to operate and expand his terror infrastructure in territories under the control of Pakistan and to carry out attacks in India and elsewhere with impunity”.

The JeM leader’s whereabouts remain unknown; he has not been charged with a crime in Pakistan and has not made any public appearances since he was detained there in 2016.

Since 1989, about 70,000 people have been killed in Kashmir’s rebel uprising and the ensuing Indian crackdown.

Last year’s death toll was the highest since 2009, with at least 260 fighters, 160 civilians and 150 government forces killed.

Rifat Fareed contributed to this report from Srinagar 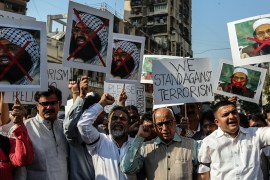 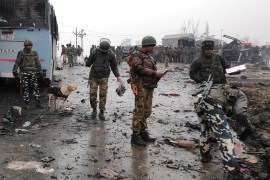 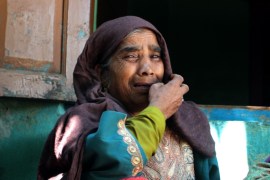 More officers killed this year than in all of 2017, as experts warn local forces are more at risk than Indian troops.