Authorities in the Philippines have arrested award-winning journalist Maria Ressa, who leads the Rappler news website that is known for its tough scrutiny of President Rodrigo Duterte‘s administration.

In a live stream posted by Rappler on Wednesday, officials of the National Bureau of Investigation (NBI) cybercrime unit were seen speaking to Ressa inside the website’s headquarters. The NBI is a government agency under the Department of Justice.

Rappler earlier said that an officer has prohibited its journalists from taking photos and videos inside her office, where the arrest warrant was served.

In a short statement to journalists, Ressa said she had not seen the indictment before her arrest was issued. She said that “if possible”, she would post bail immediately.

“We are not intimidated. No amount of legal cases, black propaganda, and lies can silence Filipino journalists who continue to hold the line,” Ressa said. “These legal acrobatics show how far the government will go to silence journalists, including the pettiness of forcing me to spend the night in jail.”

The arresting officers served the warrant at 5pm local time, just as government office hours ended, making it difficult for Ressa to apply for bail.

In a statement, the National Union of Journalists of the Philippines (NUJP) condemned the arrest of Ressa as “a shameless act of persecution by a bully government”.

“This government, led by a man who has proven averse to criticism and dissent, now proves it will go to ridiculous lengths to forcibly silence a critical media and stifle free expression and thought,” it said.

One of the political parties, Akbayan Partylist, also issued a statement in Ressa’s support, saying they condemn the government for “the latest of the series of actions aimed at stifling press freedom in the country”.

“The arrest of Maria Ressa for fighting disinformation puts a target sign on all those who tell the truth,” the statement said. “This arrest is deplorable. It highlights Duterte’s fear of true, free and critical journalism.”

Last week, Philippine prosecutors announced that it will file a libel charge carrying up to 12 years in prison against Ressa, who was named a Time Magazine Person of the Year in 2018 for her journalistic work.

The case – under a controversial cybercrime law penalising online libel – adds to legal pressure on Ressa and her company, which has already been hit with tax evasion charges that could shutter the outlet and put her behind bars.

Rappler has drawn the administration’s ire since publishing reports critical of Duterte’s signature anti-drug crackdown that has killed thousands of alleged users and pushers since 2016.

However, the new case against Ressa and former Rappler reporter Reynaldo Santos Jr stems from a 2012 report written about a businessman’s alleged ties to a then-judge in the nation’s top court.

The cybercrime law, however, came into effect after the publication of the report.

While investigators initially dismissed the businessman’s 2017 complaint about the article, the case was subsequently forwarded to prosecutors for their consideration.

Amnesty International Philippines said Ressa’s arrest was based on a “trumped up libel charge”.

“This is brazenly politically motivated, and consistent with the authorities’ threats and repeated targeting of Ressa and her team,” it said.

“The arrest of Maria Ressa is an outrageous attempt by the Philippines government to silence a news organisation that has been courageously investigating corruption and human rights violations in the country,” Ravi R. Prasad, IPI director of advocacy, said in a statement.

“The manner in which Ressa has been pursued by the government by slapping legal cases against her is not only shameful but also a gross and willful violation of press freedom.”

Duterte has lashed out at other critical media outfits, including the Philippine Daily Inquirer newspaper and broadcaster ABS-CBN.

He had threatened to go after their owners over alleged unpaid taxes or block the network’s franchise renewal application.

Some of the drug crackdown’s highest-profile critics have wound up behind bars, including Senator Leila de Lima, who was jailed on drug charges she insists were fabricated to silence her.

Ressa, already on bail for the tax charges, has maintained that the new case lacks a sound legal basis.

The law that forms the foundation of the case takes aim at various online offences, including computer fraud and hacking.

Nonoy Espina, chairman of the NUJP, earlier warned that the case would set an ominous precedent.

“This is an extremely dangerous proposition since it essentially means anyone can be made liable for anything and everything they posted even way before the Cybercrime Law,” he added. 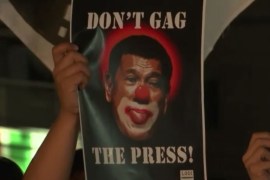 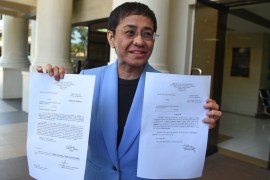 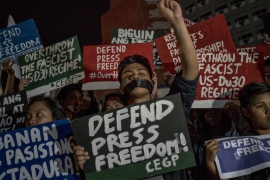 Journalist group compares Philippine president to ‘petulant child’ and warns that his action is ‘anathema to democracy’.