Two storms have brought a wintry mix of weather to most parts of the United States, with one storm now impacting many of the eastern states and another that is reorganising as it exits the Rocky Mountains.

There will be hardly any pause between the two storms. The eastern storm is bringing heavy rain over the Ohio River Valley and is increasing the risk of widespread flooding all the way into the northeast. Temperatures are on the rise in the region, melting snow from the last storm and adding to the rising water.

From Kansas to Iowa, about 3.5 million people are under an ice warning. Air temperature is just below freezing at the surface ensuring any falling rain will freeze on contact. Between 1cm and 1.5cm of ice is expected across the region, which will likely make for dangerous driving conditions and also weigh down power lines, possibly causing widespread outages.

Three people have already died because of the icy road conditions in the states of Missouri and Kansas and dozens of accidents have been reported across the region.

Just behind this system is the next storm that is reorganising in the Southern Plains after crossing the Rockies.

The storm initially brought very heavy snow across the Cascade and Sierra Nevada mountains as it made its way onshore at the beginning of the week. Snow was also seen in the higher suburbs of San Francisco, a rarity not experienced in eight years.

In the Pacific Northwest, ice covered the streets of Seattle, Washington, making travel around the city nearly impossible.

Now that the storm has crossed the Rockies, it is strengthening again.

Across the southern states, it will be more of a spring-time scenario with strong thunderstorms developing later on Thursday, bringing with them the risk of tornadoes and damaging winds to the Mississippi Valley and lower Ohio River Valley.

All the ingredients for dangerous icing will be in place again from Oklahoma to Wisconsin on Thursday. On Friday much of that threat will edge its way into southern Ontario, Quebec and northern New England.

On the extreme northern side of the storm, it will be a truly winter scenario, with heavy snow and gusty winds across the Midwest and eastern Great Lakes Region. About 20cm of snow is expected across Minnesota and Wisconsin, while in southeastern Ontario it could be as high as 30cm.

By Friday evening, the storm is predicted to have moved into the Canadian Maritimes, but severer weather is forecast. By next Wednesday, an identical scenario is expected to develop and affect much of the eastern half of the country. 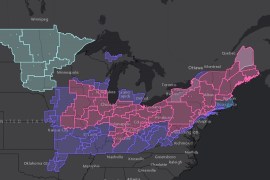 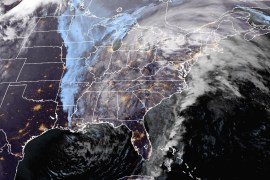 Severe storms spawn tornadoes in the US state of Florida

Stormy conditions will bring heavy rain, snow and winds for millions across the eastern seaboard.