India has said it is closely monitoring the detention of Indian students arrested in a sting operation in the United States, and has urged authorities there to not deport them against their will.

Indian news reports say as many as 129 Indian nationals were among those arrested in a sting by US Immigration and Customs Enforcement (ICE) this month. They are charged with civil violations of federal immigration law and can be deported.

A federal indictment unsealed on Wednesday revealed that the Department of Homeland Security (DHS) had set up a fake school, the University of Farmington, in Farmington Hills, Michigan, to catch people violating the terms of their visas.

According to the January 15 indictment, recruiters helped at least 600 “foreign citizens to illegally remain, re-enter and work in the United States and actively recruited them to enrol in a fraudulent school as part of a ‘pay to stay’ scheme”.

“Homeland Security Investigations (HSI) special agents uncovered a nationwide network that grossly exploited US immigration laws. These suspects aided hundreds of foreign nationals to remain in the United States illegally by helping to portray them as students, which they most certainly were not,” Steve Francis, the HSI special agent in charge, said in the statement on January 30.

The university in the Detroit area was operated for almost two years by HSI special agents as part of an undercover operation, the statement said.

‘No instructors or actual classes’

ICE said in a statement that eight people had been charged with conspiracy to commit visa fraud and harbouring aliens for profit.

The eight alleged recruiters assisted foreign students in “fraudulently obtaining immigration documents from the school and facilitated the creation of false student records, including transcripts, for the purpose of deceiving immigration authorities”, the HSI statement said.

“All participants in the scheme knew that the school had no instructors or actual classes,” it said.

The university is on the DHS list of institutions “eligible to enroll F-1 and M-1 students in the United States,” according to a list on the ‘Study in the States’ page on its website referring to the student visa categories that allow international students to legally enter the US.

The University of Farmington is listed on page 259 of the 282 pages of “Student and Exchange Visitor Program (SEVP)-certified schools and programs,” according to the site.

The Indian Ministry of External Affairs said in a statement on Saturday that it has been in contact with the US officials and has expressed concern for the arrested students. The ministry said it urged the US to release them “at the earliest” and cautioned that some “may have been duped”.

“Our concern over the dignity and well-being of the detained students and the need for immediate consular access for Indian officials to the detainees was reiterated,” the statement said.

It also said the students “should be treated differently from those recruiters who have duped them”. 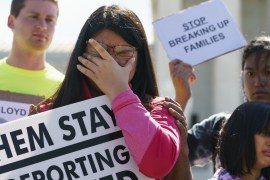 Activists lash out at a White House plan to deny green cards to immigrants who receive benefits. 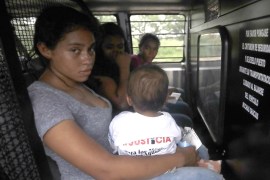 White House says administration has only temporarily halted part of its policy because it’s ‘going to run out of space’. 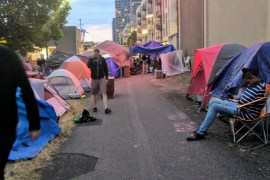