Caracas, Venezuela – Doctors, businessmen and other workers protested in major cities across Venezuela on Wednesday, calling for humanitarian aid to be allowed into the country and for President Nicolas Maduro to step down.

Several smaller protests were held throughout the capital Caracas including in the neighbourhood of Altamira in the eastern part of the city.

“We are tired of so much misery, of not getting medicine, of spending the day looking for food from one place to another,” 47-year-old Ana Bello told Al Jazeera, waving a flag. Bello, an office secretary, used her lunch break to join the protests.

In La Candelaria, in the centre of the city, protesters marched to the JM de los Rios Hospital, a paediatric centre. Some nurses and doctors left the health centre and joined the protest.

“Even though even our directors say it is not necessary, we know what it is like to see patients die due to lack of supplies,” she was quoted as saying.

Millions have left Venezuela since 2015, fleeing hyperinflation, poverty and food and medicine shortages.

Protester Cesar Gonzalez, 55, said he wants his children and grandchildren to return to the country.

“We’re becoming a country of old people. We have no future,” he told Al Jazeera.

Guaido, who has the support of the United States, and several countries in the region, joined the protests outside the University Hospital of Venezuela’s Central University where students chanted, “Guaido is here, Guaido is here and hope comes with him.”

“We will recover the health system of Venezuela,” he told the crowd, repeating his call for the military and police forces to support him.

‘We won’t allow a Vietnam in Latin America’

Maduro accuses the opposition of staging a coup and says the US is waging an economic war aimed at removing him from power. On Monday, the US imposed sweeping sanctions on the state-owned oil firm, PDVSA. The US is also handing over control of some of Venezuela’s bank accounts in the US to the opposition leader.

Maduro, on Wednesday, released a video in which he called on Americans to oppose US President Donald Trump’s plans for Venezuela.

“We won’t allow a Vietnam in Latin America,” Maduro said in the video. “If the aim of the United States is to invade, they’ll have a Vietnam worse than can be imagined.”

A day earlier, he told Russia’s state-owned RIA Novosti news agency that he would be willing to hold talks with Guaido “for the sake of Venezuela’s peace and its future”, backtracking from earlier comments.

Elsewhere in Venezuela, residents went about their daily routine.

“Things are hard, but I can’t afford to stop working for two hours to go to Altamira to chant slogans,” said Ana Gonzalez while trying to sell boxes of matches and retail cigarettes in a Caracas neighbourhood.

She didn’t want to say if she was against Maduro or what she thought about Guaido. Instead, she talked about how her business has changed due to inflation.

Gonzalez said she now sells cigarettes, one stick at a time, adding that “not everyone has the money to buy a pack.”

Others, including retired bricklayer Aldres Romero blame the opposition for the political crisis.

“They (the opposition) didn’t want to go to the last May elections, it was their choice and now they cry fraud,” he said. “I did vote, I voted for Maduro. The revolution gave me my pension and every month a box with food arrives to my house,” said Romero, who was wearing a red shirt bearing the logo of former President Hugo Chavez. 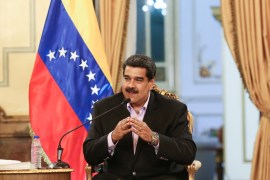 Embattled president now says he will meet US-backed opposition but in the presence of international mediators. 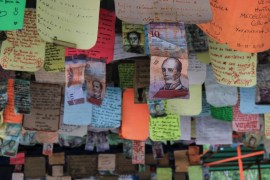 On the border, Venezuelans leave notes at the ‘Wall of Laments’

Venezuelans fleeing hyperinflation and poverty share stories of struggle at small cantina across the border in Colombia.