The Supreme Court of Pakistan will begin a review of the acquittal of a Christian woman charged with blasphemy, a verdict that sparked days of protests, death threats and chaos across the country.

On Tuesday, the Supreme Court will hear a petition against the acquittal of Aasia Bibi, who spent eight years on death row for blasphemy before being released last October.

Blasphemy against Islam is punishable by death in Pakistan and a mere rumour or accusation that someone has committed the offence has in the past led to lynchings. The country’s hardliners have made the issue their rallying cry.

At least 74 people have been murdered in connection with blasphemy allegations in Pakistan since 1990, according to an Al Jazeera tally.

If Pakistan’s top court upholds its earlier ruling, Bibi will be free to leave for Canada where her daughters have already been granted asylum. She is currently under guard at a secret location in Pakistan for her own safety.

Bibi’s lawyer Saiful Malook, who fled the country after her acquittal in the wake of death threats, is now back in Islamabad for Tuesday’s hearing. He said he expected the case to be dismissed.

“This is a frivolous petition and they should be fined for even filing it. I expect the hearing will be completed within minutes and the petition will be dismissed,” Malook told Al Jazeera.

The 54-year-old mother of five was arrested in 2009 after being accused of blasphemy following a quarrel with two female Muslim farm workers who refused to drink from a water container used by a Christian in a village in eastern Punjab province.

Incited by a local Muslim leader, a mob at the time accused her of insulting the Prophet Muhammad. Police responded by arresting Bibi, who was sentenced to death in 2010.

Her acquittal on October 31 angered some groups that staged nationwide protests for days, demanding she be publicly hanged. Members of the far-right Tehreek-e-Labaik Pakistan (TLP) party blocked the main roads in different cities for three days after Bibi’s acquittal, calling for the murder of the Supreme Court judges who freed her.

TLP’s chief Khadim Hussain Rizvi demanded that the court’s decision be reversed and that Bibi be hanged immediately.

Prime Minister Imran Khan‘s government then promised Bibi would not be allowed to leave Pakistan until her case is reviewed, following which the hardliners halted their protests. The government later cracked down on TLP members, arresting more than 3,000 of them and pressing “terrorism charges” against the group’s leaders.

Authorities arrested TLP leader Khadim Hussain Rizvi and several of his followers for organising rallies against Bibi. Rizvi and the others remain in custody pending trial over the damage of public property and for threatening Supreme Court judges who acquitted Bibi.

Pakistani police have stepped up security around the High Court in Islamabad on the eve of the Supreme Court’s final decision.

Ghulam Mustafa Chaudhry, the lawyer for petitioner Qari Salam, a Muslim leader linked to the TLP party who first brought the case against Bibi in 2009, said if the petition is accepted, Bibi would be returned to prison and death row.

“Whatever is to be decided, it will be decided by the court on Tuesday,” said Chaudhry.

“We are hopeful for a positive outcome.”

With additional reporting by Asad Hashim 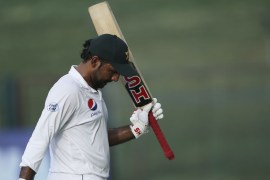 Sarfraz Ahmed’s taunt in Urdu was caught by stump mics but he denied they were aimed at South Africa Andile Phehlukwayo. 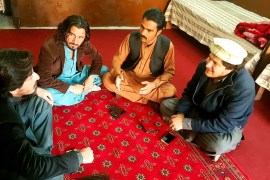 Court orders Mehsud be kept in police custody for four days for rioting and inciting hatred at a Karachi rally. 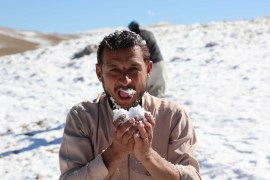 From Karachi to Swat, rain and snow brought life to a standstill. 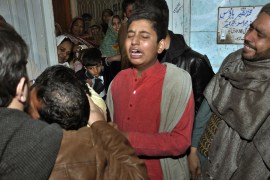 Counterterrorism officers arrested over killing of a couple, their teenage daughter and another man in Punjab province.

Justice Department seeks immediate ban on WeChat in US