Spain, France, Germany and Britain have given embattled Venezuelan leader Nicolas Maduro an ultimatum, saying the nations would recognise opposition leader Juan Guaido as president unless he calls elections within eight days.

“If within eight days there are no fair, free and transparent elections called in Venezuela, Spain will recognise Juan Guaido as Venezuelan president,” Prime Minister Pedro Sanchez said in a televised announcement on Saturday.

Guaido, the 35-year-old head of the National Assembly, proclaimed himself acting president of Venezuela during massive street rallies this week.

He is trying to remove Maduro from the economically strapped country following controversial elections that saw the socialist leader sworn in for a second term.

Maduro’s reelection last year was contested by the opposition and criticised internationally – but he has until now retained the loyalty of the powerful military.

The United States and its regional allies – Brazil, Argentina and other countries – had already endorsed Guaido in repudiation of Maduro.

Left-leaning governments in the region, including Cuba and Bolivia, have thrown their weight behind Maduro. Mexico under its new president, Andres Manuel Lopez Obrador, has so far refused to take sides.

Spain is closely linked to Venezuela, a former colony, as some 200,000 of its nationals live there.

Since his self-proclamation as interim leader, Guaido has rejected an offer of talks with Maduro and called for a “major demonstration”.

“Unless elections are announced within eight days, we will be ready to recognise @jguaido as ‘President in charge’ of Venezuela in order to trigger a political process,” Macron said on his Twitter feed.

A spokesperson of the German government issued a similar statement.

“Time for a new start for the suffering ppl (people) of Venezuela,” Hunt said in a statement later on Saturday.

“In the absence of an announcement on the organisation of fresh elections with the necessary guarantees over the next days, the EU will take further actions, including on the issue of recognition of the country’s leadership,” Mogherini said in a statement.

“Nobody is going to give us deadlines or tell us if there are elections or not,” Jorge Arreaza told a special session of the United Nations Security Council.

“How is it that you can issue an ultimatum to a sovereign government?” he said.

The United Nations Security Council (UNSC) on Saturday voted to discuss the situation in Venezuela at the request of the US despite opposition from Russia and China.

Speaking at the special UNSC session, US Secretary of State Mike Pompeo said that it was time now for countries to pick a side on Venezuela.

“Now it is time for every other nation to pick a side. No more delays, no more games. Either you stand with the forces of freedom, or you’re in league with Maduro and his mayhem,” Pompeo said.

Despite Guaido’s international endorsements, Maduro still has the support of the military and powerful, longtime allies like Russia and China and is vowing to defend his socialist rule.

Maduro broke off diplomatic relations with Washington and set a 72-hour deadline for US diplomats to leave the Latin American country.

But Pompeo on Saturday warned the Venezuelan leader to protect the US embassy. “Let me be 100 percent clear – President [Donald] Trump and I fully expect that our diplomats will continue to receive protections provided under the Vienna Convention,” Pompeo said in his UNSC speech.

Guaido on Friday vowed to remain on the streets until his country has a transitional government, while Maduro dug in and accused his opponents of orchestrating a coup.

Guaido’s talk with reporters in a plaza in Caracas turned into a de facto rally as thousands gathered after hearing he would speak in public for the first time since taking a symbolic oath on Wednesday proclaiming himself the nation’s rightful leader. 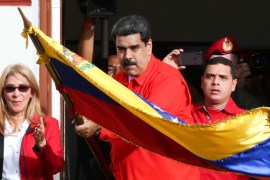 US Secretary of State Mike Pompeo to urge UN Security Council to recognise Guaido, a proposal already opposed by Russia. 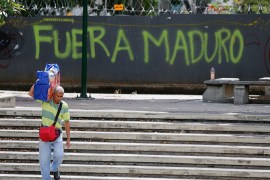 Venezuela: ‘Guaido and Maduro aren’t going to feed my children’

As political crisis escalates, many Venezuelans say just having a job and putting food on the table remains top priority