A proposal to lower the age of criminal liability in the Philippines to nine years has come under fire from human rights groups and legislators who warned the move could harm rather than protect children.

The justice committee of the House of Representatives on Monday approved a bill proposing to lower the age of criminal liability from 15 to nine.

“This bill was brought about by the alarming increase in the number of criminal syndicates using minors to carry out criminal acts based on recent news reports,” House justice committee chairman Doy Leachon said in a statement defending the proposal.

Leachon told reporters children would not be imprisoned, but would instead undergo “rehabilitation, reformation and confinement” in reformative institutions.

The Senate’s justice committee began deliberating the proposal on Tuesday.

Crimes covered by the bill were murder, parricide, infanticide, serious illegal detention, car-jacking and violation of the Dangerous Drugs Act.

Under the proposed law, a child above nine years old but below 18 years old, when they commit an offence, would be exempted from criminal liability and intervention unless they had acted with discernment, in which case the child shall be subjected to appropriate proceedings.

President Rodrigo Duterte previously urged Congress to lower the age of criminal liability to ensure that “the Filipino youth would accept responsibility for their actions and be subjected to government intervention programmes”, the Manila Times reported.

Presidential spokesperson Salvador Panelo said the measure would deter criminals from corrupting children and turning them into criminals.

“If you have a law that will criminalise this particular age bracket, they will no longer be used by criminals [in their illegal acts]. They are using them now because they will be freed, they can get out. Now, this is the purpose of the president [to counter that],” he said.

‘Completely out of bounds’

A number of senators expressed concern over the move.

Senator Benigno “Bam” Aquino 4th described the bill as “immoral” and said he doubted it would be passed in the Senate.

“I absolutely doubt that this will pass the Senate. I think there’s enough in the Senate currently who know that lowering the age of criminal liability to nine years old is completely out of bounds,” he said in a statement.

“It is anti-family, anti-poor and simply unjust. Moreover, it will promote a heartless and ruthless society that has no regard for its own people,” said Senator Antonio Trillanes, one of Duterte’s biggest critics.

Risa Hontiveros said the idea went against Philippines’ international commitments and a global trend of raising, not lowering, the criminal age. “Is this a race to the bottom?” she told a Senate hearing.

The non-governmental organisation Save the Children released a statement saying lowering the age of criminal liability was not in the best interest of children.

“This will only push them to further discrimination, abuse and eventually into more anti-social behaviour,” it said.

Save the Children instead suggested the Juvenile Justice and Welfare Act fully implement programmes preventing and responding to criminal behaviour by children and reintegrating offending children back into their families. 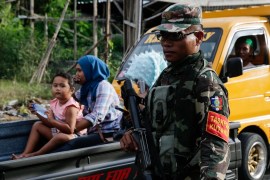 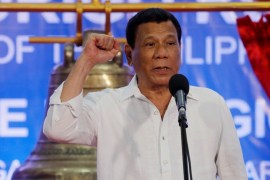 Controversial president says his country’s bishops are ‘sons of b*****s’ and ‘most of them are gay’. 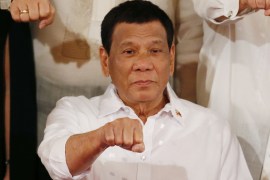 Philippine president accuses the independent constitutional body of hampering the work of his administration. 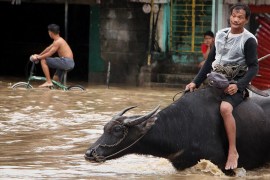 Nearly 25,000 people displaced by landslides and floods triggered by heavy rains brought by a tropical depression.